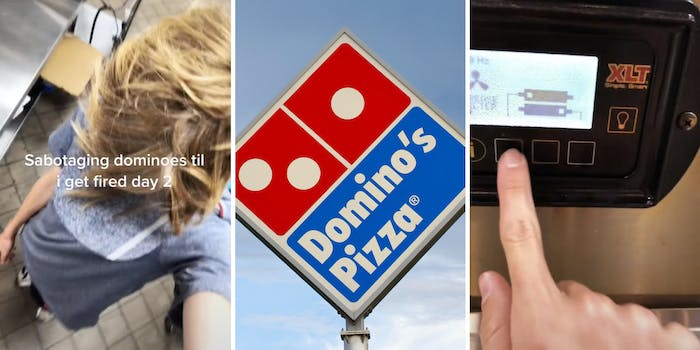 ‘More like sabotaging your own coworkers?’: TikTok appears to show a Domino’s worker trying to get himself fired

Some of the videos include swiping gift cards and turning off an oven.

People document the ways in which they or may not want to get out of their jobs all the time, but one TikToker has gone viral with several videos where he appears to be sabotaging his job—or at least making it look that way.

For the past couple of weeks, TikToker @peter.4pf has posted a series of videos at Domino’s depicting a series of minor incidents in which his actions could cause delays or mishaps.

In a video posted on April 20, he said that the reason why pizzas were delayed is that he was swiping several gift cards as the computer screen shows what appears to be a stock image of the stock market chart.

This week, he started to use the “do something to get fired” meme format to illustrate those videos. The first day included footage of opening up the TikTok app on what he says was a work phone with only Domino’s-related apps visible. He opens the app all the way to the camera function and captures himself filming.

In another TikTok, he filmed himself turning off the oven.

“Turning oven off during rush [hour],” he wrote as a caption in the video.

There are aspects to suggest that not everything is as it seems; beyond the stock photo, we have no way of knowing exactly when he shut the oven down. But many are taking it at face value, suggesting that he’s ruining his job prospects by posting videos of self-sabotaging this particular job. In response to one commenter, peter.4pf responded, “Bruh…they dont care.”

Since then, he’s posted a video where he knocked down a series of Domino’s boxes with his foot outside as if they were dominoes; with each box, the size increased.