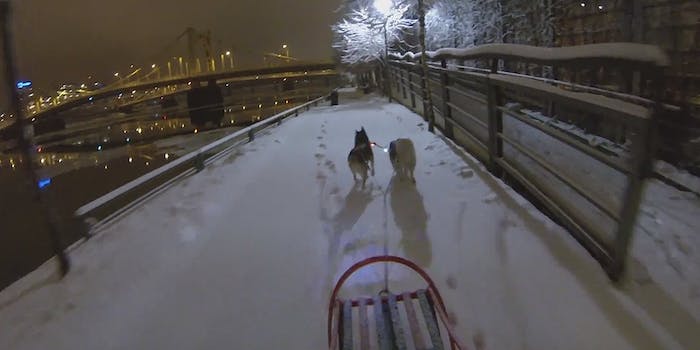 Watch a man and his huskies dogsled around Pittsburgh

This video is sure to warm you up.

What happens when a snow storm dumps inches, or even several feet, of snow on your city? Some people go outside and film it with drones. Some people dress up in costume and wander the streets of Boston.

And some take their dogsled along with two happily frolicking pups for a ride around the city.

Matthew Philips, an adventurer with “lots of strange and random hobbies,” and his two huskies went for a an evening mush around Pittsburgh, Penn., last night after Winter Storm Juno hit the Northeast U.S.

Philips strapped a GoPro camera to his dogsled and his record as his pups traveled throughout the city, bumping into the occasional pedestrian who braved the cold and reached down to pet them.

If this video doesn’t make you warm inside while the snow falls down, then I don’t know what will.

Philips has a variety of other mushing and dogsledding videos on his YouTube channel, as well as more summertime activities like hang-gliding—if you need to forget what it’s like to be cold.

Update 8:30pm, Jan. 27: Philips wrote us with some more info about his sled ride:

“Since I knew downtown was a ghost town late at night, I watched the forecast the other night and waited for the perfect time to go downtown in hopes of just having a fun time and getting some one-of-a-kind pictures. Then we packed up the equipment and the dogs hopped in the car and we just picked a good spot to park and went for it. All-in-all, we probably did around 2 miles, including the roads, bike lanes, sidewalks, bridges and the riverfront trail. We encountered one snow plow, going the opposite direction who stopped and looked at us in surprise, and a couple pedestrians and police officers, who pulled out their phones to take pictures and joked about needing a ride home after the storm finished.”