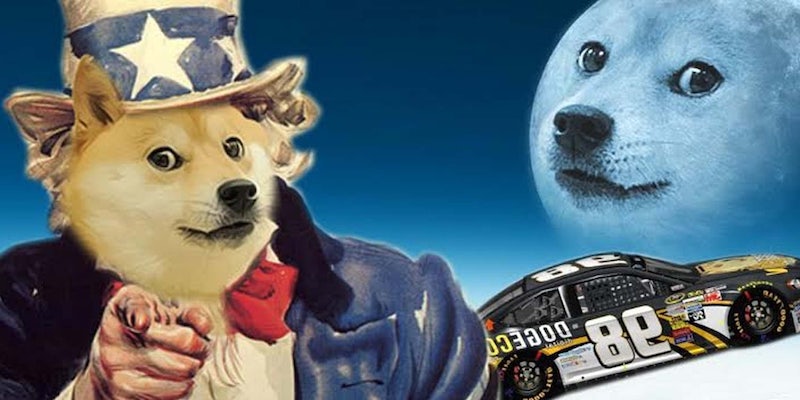 The Dogecoin community is nothing if not supportive, and a little bit weird.

When NASCAR driver Josh Wise needed a sponsor, Dogecoin users came up with $50,000 to get their favorite Shiba Inu’s face on a race car. Now Wise needs fans’ votes to get into Saturday’s NASCAR All-Star Race, and an enthusiastic member of the Dogecoin community created this epic video to drum up support for Wise.

Elvis Nava, an 18-year-old student from Italy, produced the video that, much like the Dogecoin community, doesn’t take itself too seriously. With a hyperbolically intense soundtrack, Nava’s video combines slightly-shaky footage of his computer and TV screens with over-the-top visual effects such as laserbeam eyes and exploding flames.

Though Nava had been on a yearlong hiatus from making videos to focus on school work, he said Dogecoin enthusiasts, which he described as the “greatest community ever,” inspired him to make this video to promote Wise’s cause.

“Those guys are literally the kindest people of the Internet,” Nava told the Daily Dot. “Starting from nothing more than a dog on a coin, they managed to fund charities, create a global tipping network, and sponsor a NASCAR driver. Just wow.”

As someone who has been following Dogecoin for a while, Nava said capturing the cyrptocurrency’s light-hearted essence in his video came naturally.

As for Wise, he’ll need to beat out 29 other NASCAR drivers to win the Sprint Fan Vote. If he does, he’ll race against 21 other drivers for a first place prize of $1 million in the all star race. For reference, $1 million is worth 2 billion dogecoins at the current exchange rate.

As conveyed by Miss Sprint Cup, Wise was in the top 10 in the fan vote as of Monday.

Even if Wise gets into the race, he’s likely to be a big underdog. Wise finished in 20th place out of 43 drivers in his first race under the Dogecoin banner at Talladega Superspeedway earlier this month.

Even though Wise didn’t win the race, the Internet still adored him. It seems the feeling is mutual. Even if an obscure Internet meme is an unlikely mascot for a NASCAR driver, Wise has certainly embraced it and made it his own.

“@LittleShibe: @josh_wise the #dogecoin pic is finished if u want :) pic.twitter.com/fpp69VKdzD” So funny! Your talented!