Is the Dogecoin community being "goxed"?

The Dogecoin honeymoon is over.

The alternative cryptocurrency, named after the popular meme, rode wave after wave of good press; from bankrolling the Jamaican bobsleigh team at the Sochi Winter Olympics to the recent fundraising attempt to raise 40 million doge for a Kenyan water charity. It was the cryptocurrency that could do no wrong.

However, over the last two days the community has been sent into a panicked frenzy over seeming technical failures of the largest altcoin exchange Cryptsy, prompting conspiracy theories and comparisons to the now-infamous failed Bitcoin exchange Mt. Gox.

Dogecoin is a virtual currency modelled loosely on Bitcoin. Though it still lags far behind Bitcoin, Dogecoin has rapidly become one of the most prominent of the alternative cryptocurrencies, or “altcoins,” since its launch in December.

Cryptsy specialises in these altcoins. It allows trades in over 100 different types, ranging from Dogecoin to the Icelandic AuroraCoin, from Russia Today host Max Kaiser-inspired MaxCoin to the “privacy-centric cryptographic currency” Dark Coin.

The current daily volume of transactions (in all cryptocurrencies) of the exchange is more than 4000 BTC, or roughly $2.5 million. Dogecoin alone accounts for more than half of this, and has a total market cap of around $56 million. 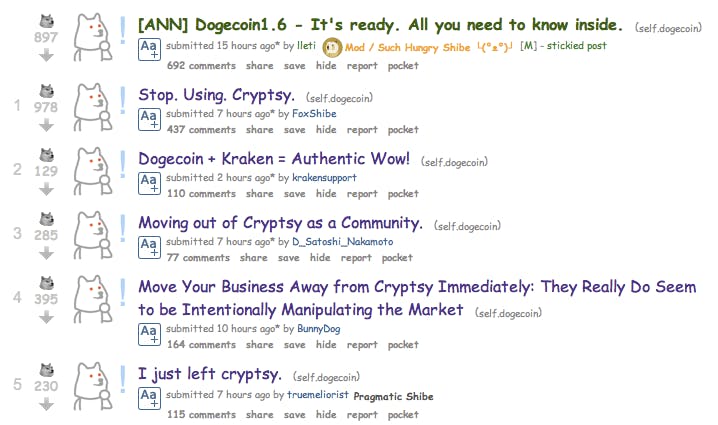 But now, after apparent system faults have left the dogecoin community facing multiple periods of downtime, angry shibes (as community members call themselves) are threatening to vote with their wallets and take their business elsewhere.

Of the current top 5 posts of the Reddit r/dogecoin subforum yesterday afternoon—the epicentre of the dogecoin community—4 are advocating that members stop using the exchange immediately. The highest-rated, “Stop. Using. Cryptsy.“, received almost a thousand upvotes over seven hours.

The exchange has also crashed in the middle of rallying points of the volatile dogecoin market, which has led the more conspiratorial shibes to theorise that Cryptsy is deliberately manipulating the market for its personal profit.

The truth of this allegation remains uncertain. But it appears to have been the straw that broke the camel’s back, with community members pouring forth to recount tales of persistent errors, unacceptably long waiting times for withdrawals and wrongly-transferred funds.

Cryptsy has yet to comment on the accusations of deliberate financial malpractice, and it’s difficult to speculate whether this indeed spells out the end for the exchange as a major player in the Dogecoin markets. But the memory of Mt. Gox still lingers fresh in everyone’s minds.

At its peak the single largest bitcoin exchange by a considerable margin, Mt. Gox had been plagued by technical difficulties over its final months before finally collapsing in late February, with a $450 million hole in its finances.

Disgraced CEO Mark Karpeles blamed hackers for this staggering loss, with furious Bitcoin users—some of whom lost millions in the crash—accusing him of outright fraud. The latter camps’ theories have been fuelled by the recent discovery on the blockchain of a mysterious 180,000 BTC being distributed between various accounts, seemingly in an attempt to try and avoid detection.

Either way, bitcoin is still reeling from the crash; after all, more than 4 percent of all bitcoins that will ever exist have gone missing. The initial collapse drove altcoin prices down by more than 10 percent, and now Cryptsy’s predicament proves no cryptocurrency is immune to these problems. Though Dogecoin has had a meteoric and largely trouble-free rise thus far, it’s now an asset class worth tens of millions of dollars, and with that value comes risk.

Dogecoin might be going to the moon, but that doesn’t mean there won’t be a few hiccups along the way.