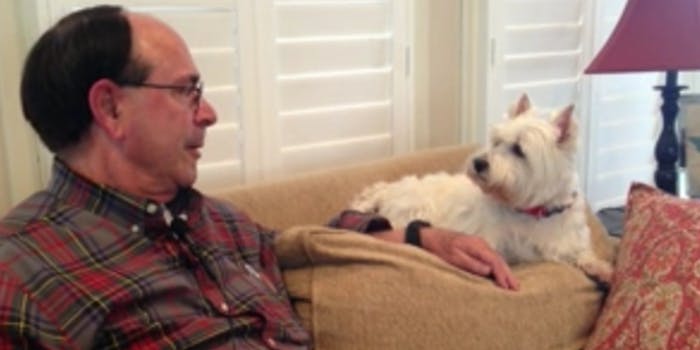 For a short time, it seemed the city of Irving, Texas, a suburb just west of Dallas, would not only have the mayor it needed, but the mayor it wanted: an adorable Westie named Dylan.

On Tuesday, his owner, political blogger Mike Howard, filed a petition to put him on the ballot for the May 5 election. This set the wheels in motion for a political ruff-alution, one in which man and dog work together to make Texas a better place. One in which the Dog Mayor has a Twitter account and speaks directly to the people. I mean, look at this flyer: 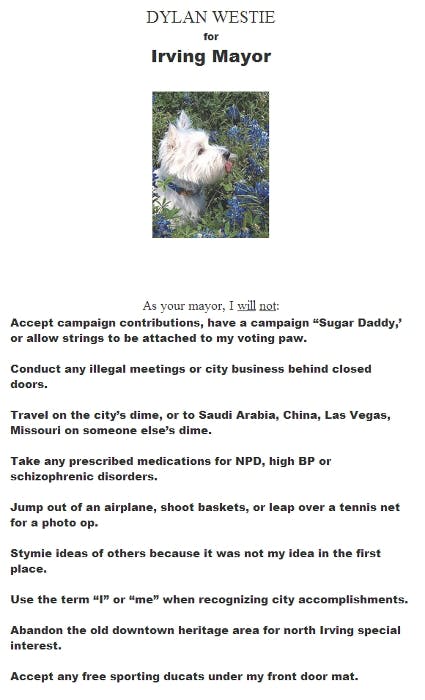 Sadly, now it seems Dylan is not eligible to run. The Westie’s not a registered voter, Howard improperly filled out the paperwork to register, and his tiny paw print was never notarized. Howard claims he put Dylan on the ballot because of political infighting, nay, catfighting in Irving. “What better way to solve a catfight than to get a good dog in the mix,” he adds. Howard also does not have power of attorney over Dylan.

(Sn)outrage! Obviously Dylan has several dog years on any of the other candidates, a better sense of smell, and a progressive nap platform. If he can’t run for Mayor, can we at least get him a sitcom called Kitty Council, in which Dylan plays a rogue journalist exposing feline corruption? Four legs good, two legs bad.