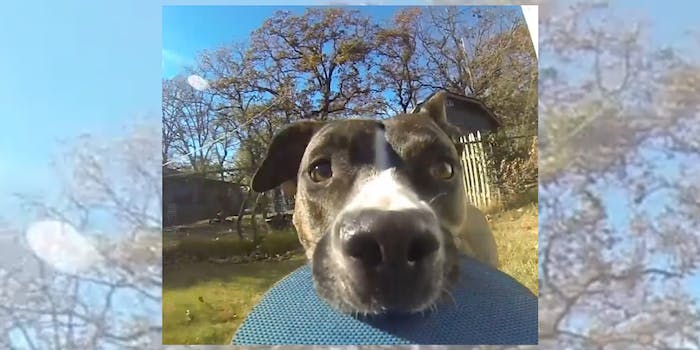 What happens if you give a dog a GoPro camera?

Get this dog an agent.

If there’s anything the internet has taught us, it’s that we should just give our cameras to the animals and let them go. Whether it’s dogs stealing cellphones, or seagulls stealing GoPros, everyone knows that animals shoot the best videos.

The latest animal-directed film comes from a dog running with a GoPro attached to a pingpong paddle. It rivals chase scenes from James Bond movies.

The only reason we have a GoPro… from Zoomies

The video was originally posted to Reddit by user carmenlighting, along with the caption “The only reason we have a GoPro…”

The video shows Bonnie, or Miss Bonnie, taking a camera her owner has cleverly attached to a pingpong paddle. She then starts running around the yard while her owner and some other dogs chase her around.

“We rescue and foster dogs frequently,” the owner explained in a comment on the post, “and we found her starving and abandoned. She has come a long way and has never looked back. We love our little BonBon.”

The video has received nearly 60,000 upvotes on Reddit. People began posting the video to Twitter, where it went viral.

People also edited the audio in the video. Here’s Bonnie with “Yakety Sax” in the background.

And the “Naked Gun Theme”.

I added some audio: pic.twitter.com/fLM54jkuLA

Everyone seems to love Bonnie and her movie.

This is gold. Especially those eyes.

This is the best use of @GoPro that I've ever seen.

But the Twitter user who first posted the video, @pastordan, took it down after getting thousands of retweets. He explained that the dog’s owner wasn’t comfortable with people sharing the video.

Folks, I had to take down the doggo video at the owners' request. Stand by for explanation.

5. Turns out, this person wasn't really comfortable with her pupper's newfound fame. She (I assume it was a she) thought the dog was misunderstood as "stealing" the camera when in fact they were playing a game.

According to @pastordan, a licensing agency asked him to take the video down or pay $500.

6. She asked me to get in touch with a licensing agency, so I dropped them a line and promised to delete the vid if requested.

12. It was actually a relief to have the licensing agency come through and say "500 bucks or take it down." (According to them, that's a standard fee, so I don't think they're getting greedy.)

Also, the dog didn’t steal the camera, and apparently the owner thought the tweets about the video were misleading.

5. Turns out, this person wasn't really comfortable with her pupper's newfound fame. She (I assume it was a she) thought the dog was misunderstood as "stealing" the camera when in fact they were playing a game.

13. So, lessons: don't ever post anything online you don't want to get out of your control, be sure to attribute your sources, and people sure love funny dogs.

These tweets raise a lot of good points about publicly sharing content on the internet—and who owns the content you’re sharing.

One thing is certain, though. A lot more people are about to start giving their dogs GoPros.