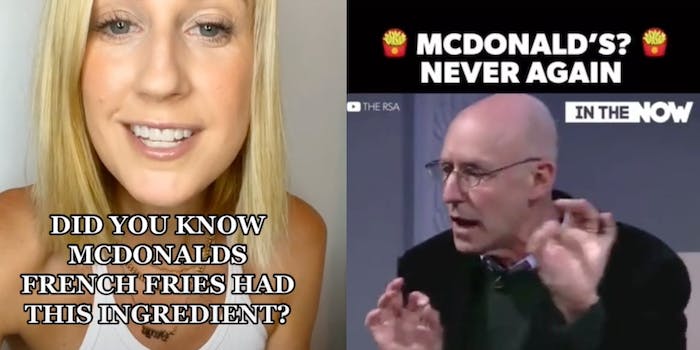 This may not be the first time people have heard, “Did you know McDonald’s fries have this ingredient in them?”

The latest in speculation about products from the fast food giant, a video shared on TikTok by creator Courtney Swan (@CourtneySwan), explores the use of pesticides on the potatoes which are made into the chain’s iconic french fries.

The recent video has gone viral on the Gen Z-centric platform with 62,000 likes and just over 2,000 comments.

But she doesn’t explain the problem itself. Rather, she employs a video from a lecture given by author and journalist Michael Pollan in 2013. The clip is taken from a larger lecture given to the Royal Society for Arts (RSA), “How Cooking Can Change Your Life.”

“A very common defect of Russet Burbank potatoes is called net necrosis,” Pollan says in the clip. “And you see potatoes with little brown lines sometimes, or spots that comes through it. Well, McDonald’s won’t buy them if your potatoes have that. And the only way to eliminate that is to eliminate an aphid and the only way to do that is with a pesticide called Monitor that is so toxic that the farmers who grow these potatoes in Idaho won’t venture outside into their fields for five days after they spray.”

Pollan said that after harvesting these potatoes, they have to be placed in atmosphere-controlled sheds “the size of a football stadium” to “off-gas the chemicals in them.”

In the comments, people claiming to be potato farmers were quick to point out that this is false information.

“I can confirm this is false information as a farmer in Idaho who grows potatoes,” user Sheena Rush wrote.

Even those who claimed to know McDonals’s potato farmers jumped in.

“My friend grows McDonald’s potatoes in Idaho,” user Bradly Cook wrote. “This is not the case at all.”

According to the Centers for Disease Control and Prevention, the use of Monitor insecticide was voluntarily canceled in the U.S. in 2009. This means that it was no longer in use even at the time Pollan gave his lecture.

McGill University also says that Monitor was discontinued by McDonald’s in 2009, writing that “while Pollan doles out the good ‘eat food, mainly plants, not too much’ advice, his attacks on processed foods are, often times, overzealous. Such is the case of Pollan and McDonald’s fries.”

In 2015, Mythbusters‘ Grant Imahara found that there were 19 ingredients in McDonald’s french fries. Noted CNET:

The list not only includes the potatoes themselves, plus various oils, dextrose and sodium acid pyrophosphate, but also natural beef flavor, hydrolyzed wheat, hydrolyzed milk, citric acid, salt and hydrogenated soybean oil with the antioxidant TBHQ, which “preserves the freshness of the oil.”

The longest word on the ingredient list is dimethylpolysiloxane, an anti-foaming agent. “It helps keep the oil from splattering,” Imahara says in the video. “It’s approved for use in a number of many other very familiar foods.”

The Daily Dot has reached out to McDonald’s.