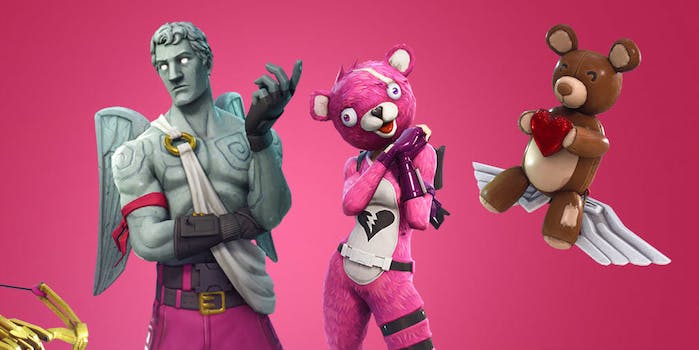 More and more couples are reportedly divorcing over Fortnite

Fortnite is a beautiful way to bring people together. Across the country, school cafeteria tables rumble with friendly circles discussing combat stats, parents are hiring professional coaches to spend more time with their kids, and thousands of streamers are entertaining the masses with their various gimmicks. Fortnite, like all good things, has its dark side, though, as hundreds of couples learned throughout 2018.

According to a recent report by U.K. divorce resource site Divorce Online, more than 200 couples filed for divorce in 2018 while citing Fortnite and addiction to other games as a reason for the split. A victory royale that is not—at least for the spouses on the receiving end of that negligence.

“These numbers equate to roughly 5 percent of the 4,665 petitions we have handled since the beginning of the year and as one of the largest filers of divorce petitions in the U.K. is a pretty good indicator,” a Divorce Online representative wrote.

With the rise of digital media, addiction to games, social media, and other electronic distractions will likely stay a significant source of marital problems in the West. The World Health Organization established Gaming Disorder (otherwise referred to as gaming addiction) as a public health concern.

Whereas the WHO states that Gaming Disorder must be established over the course of many months, one imagines a relationship between two partners might require far less strict guidelines for at least one partner to recognize an issue.

There’s also the issue of money being spent on games like Fortnite. Research firm SuperData says that players spent $8.2 billion on digital games in July 2018, with Fortnite sitting pretty at the top of all earners on console and fifth on PC.

Battle Royale games themselves have exploded in popularity in the last year, most notably the cartoony Fortnite and the more realistic PlayerUnknown’s Battlegrounds. Battle royale modes are coming to Call of Duty: Black Ops 4 and Battlefield V in the coming months.