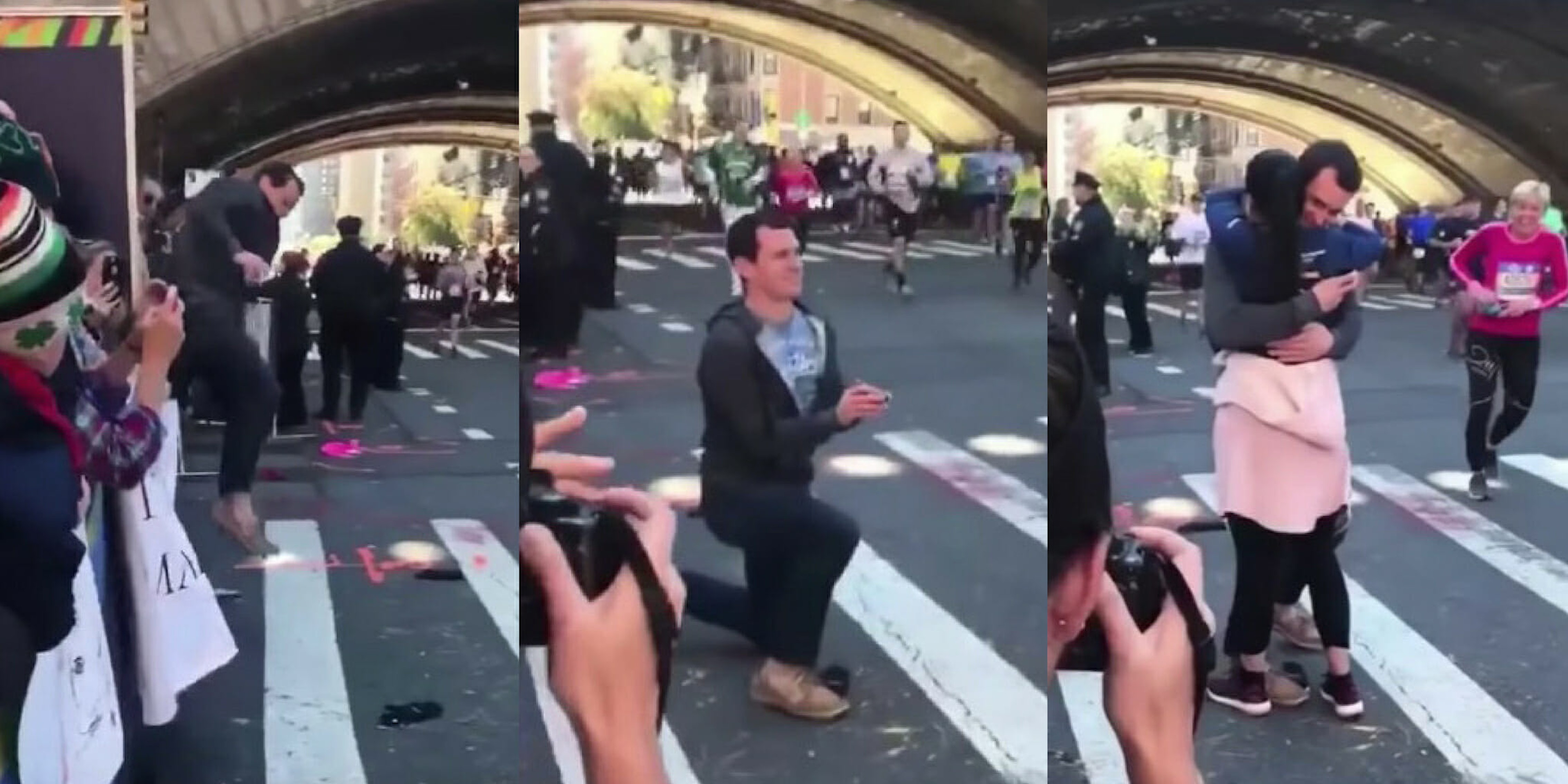 She spent a year training, and he stops her halfway through?

A Jersey City firefighter proposed to his girlfriend as she was 10 miles away from finishing her New York City Marathon run this weekend, and the internet can’t stop chastising this man’s unforgivable gaffe.

According to New York 4, St. Barnabas Hospital nurse Kaitlyn Curran was in mile 16 of her run when her boyfriend Dennis Galvin popped over the spectator railing, got down on one knee, and asked her to marry him. Around her, other spectators and runners cheered the couple on, some stopping to take pictures of them before running along, others just rubbernecked over Galvin’s proposal.

However, the internet didn’t see the proposal as sweetly as the people cooing at Galvin’s smooth move.

this man is THE WORST https://t.co/mxJqmoYaKl

He couldn't propose to her at the finish line?

Across Twitter, Many accused the man of being selfish, having stopped his girlfriend in the middle of her life-accomplishing run just to make the moment about himself.

Men of the world – do not do this. This isn't heartwarming. This wasn't about this dude but he HAD to make it about him. This is just a man who needed to be the center of attention. Let her run. Let her finish. https://t.co/OQ5Nuspsei

Others questions the ramifications that his popped question would have on the woman’s run itself—could she make it the next 10 miles? How poorly would her run time be affected by his stunt, both in having to stop for the proposal and in now being distracted from her initial task at hand?

How did the stop affect her muscles, probably already worn from the first 16 miles??

imagine another ten miles to go, your muscles all messed up and tight, all because some dude wants a more equitable legal arrangement. the worst

If you've ever trained for a marathon, the amount of time that goes into, is a lot. To be interrupted for a damn proposal is insane. https://t.co/bW6ocBqwuQ

He couldn’t even take her sweatshirt, wrapped around her waist, for the last leg of the run? And we’re supposed to believe that he loves her? Hmm.

AND he didn't even take her sweatshirt that she clearly didn't want or need!

I'd have given the ring back at the finish line.

Another video from a different angle of the proposal showed the woman asking aloud how she was now, still 10 miles away from her finish line and having been proposed to, expected to finish the race. According to CBS News, Galvin chose mile 16, near the Queensboro Bridge, to propose because it was the first Manhattan stop of the race (which still doesn’t explain the significance since they live and met in Jersey City).

SHE SAID YES: A woman who was running in Sunday’s New York City Marathon was at mile 16 when her longtime boyfriend hopped over the barrier and dropped to one knee. She ended the day with a medal around her neck and a ring on her finger. https://t.co/8xbZ6P24RM pic.twitter.com/YizdEJYOhc

Curran trained a year for this marathon, and managed to finish in four hours and 24 minutes. Alas, despite the criticism, it’s also Curran marrying this well-intentioned (albeit misguided) man, not the internet.