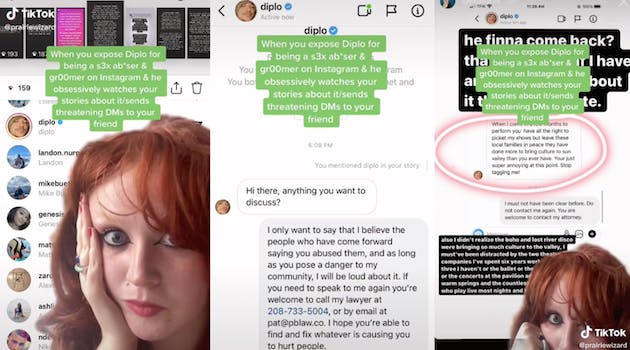 This is not the first allegation of grooming made against the DJ.

Popular DJ, recording producer, and songwriter Diplo is facing renewed allegations of grooming from a young woman online. After they were made public, he allegedly sent “threatening direct messages” to the young woman, which her friend posted on TikTok.

“When you expose [Diplo] for being a [sex absuer] and [groomer] on Instagram and he obsessively watches your stories about it/sends you threatening [direct messages] to your friend,” the text in the TikTok reads.

The video has gained over 112,000 views and it features the creator showcasing screenshots of DMs the DJ allegedly sent to her friend. One alleged message from the DJ read, “Hi there, anything you want to discuss?” The user’s friend replied with a lengthy message saying she would not be talking with him and directed him to her lawyers.

The creator shows more messages between Diplo and her friend, who asked the DJ to stop contacting her multiple times but he continued to message her.

This is not the first time Diplo has faced allegations like these. They started popping up in October 2020 when he was accused of “grooming” popular TikToker Quenlin Blackwell—then 19-years-old—after she moved into one of his properties in Los Angeles. The two shut down the accusations and clarified their living situation.

“OK so I rent one of my properties to @quenblackwell,” he tweeted, “And yes I use the studio that is in that building. Her social media is sarcastic and chaotic and I can see you can get a twisted idea but there is nothing but a friendship between us.”

He continued in a separate tweet, “As a landlord, I don’t really consider age or race as a qualification. U just gotta pay security deposit. And don’t poke holes in the walls or ruin my carpet.”

She said in her own statement that she posted to Twitter, “I am an adult. I’m not being groomed. I’d rather break both of my legs and be forced to walk than pursue Diplo romantically and he’d rather choke.” She went on to say that Diplo and his team have been her mentors and are a “safety net.”

Just last month, in July, Diplo was accused yet again of sexual misconduct. According to legal documents obtained by TMZ, the DJ allegedly coerced a young woman into performing oral sex on him and would not let her leave his hotel room until she did.

Diplo publicly denied the allegations through a statement from his lawyer, saying it was a “shakedown” that his ex, Shelly Auguste, was behind.

Diplo did not immediately respond to the Daily Dot’s request for comment.

Update 6:19 pm CT Aug. 9: The headline for this story has been changed.

The TikToker told the Daily Dot that the exchange between Diplo and her friend happened when their community rallied against the DJ due to sexual assault allegations made against him.

“This man came into our small Idaho community during a time where he was in the news for having multiple rape allegations under his belt,” she explained via DM. “When multiple people in the community responded with outrage to these extremely serious allegations and asked him/his team to not come back, he chose to specifically target my friend, a person who had shared their own experiences of sexual assault in their posts regarding Diplo’s abuse. In the messages he sent them, he treated the various allegations against him like jokes. Even after [the friend] asked him multiple times to stop contacting them, he persisted, even finding their other accounts and watching those stories after [the friend] had blocked him.”

The TikToker went on to criticize Diplo for his messages responding to her friend’s posts calling him out.

“There is something very obviously wrong with this 43 year old man,” the TikToker told the Daily Dot. “Instead of taking these allegations seriously, he harasses a young femme on Instagram, makes fun of their concern, and continues to send them inappropriate messages after they told him to stop.”