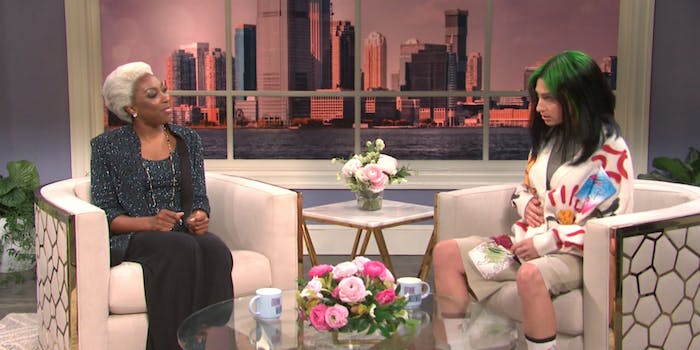 Dionne Warwick has been christened Queen of Twitter after she started tweeting more frequently over the last few weeks. The iconic singer explored the origins of “hot girl” and called out Chance the Rapper and the Weeknd. She put to rest any rumors that it’s not really her tweeting, saying last week that her niece Brittani is helping her master Twitter.

Perhaps that’s what inspired SNL to devote an entire sketch to Warwick this weekend. Ego Nwodim plays Warwick as the host of her own talk show, and one of her guests is Billie Eilish (Melissa Villaseñor), who’s introduced as “William Eyelash.” Warwick then proceeds to ask Eilish to put a hex on Wendy Williams for her.

It turns out Warwick riffing on the Weeknd and Chance the Rapper’s names actually led to an upcoming collaboration, “Nothing’s Impossible,” as she announced on Monday. Maybe Eilish is next?