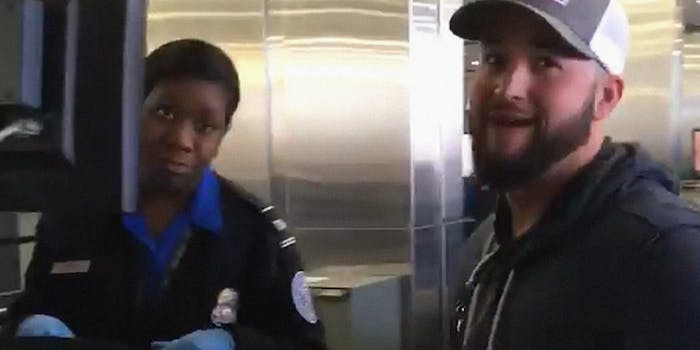 The sex toy was sealed in a clear bag along with some lube, so the liquid forced a secondary bag screening. The moment the woman working security pulls it out of the bag, the son says, “What the hell is…” then he turns away, covering his face in embarrassment as the two men behind him explode in laughter.

“Look at you!” says the security officer. “You didn’t know what was in your bag!”

“Pull it out please!” beg the men filming, but she decides not to comply with that particular request and instead puts his carry-on in a tray.

It’s not clear whether the father was the one filming or if he had an accomplice, but he was the one who posted the video to Facebook, where it’s already been viewed 23 million times.

Usually it’s not a good idea to mess with TSA agents. Their jobs are hard enough without having to deal with any unnecessary shenanigans. But in this case the woman seems almost as amused as the victim’s friends.

“Well you have to admit, it was priceless,” she says at the end of the video.