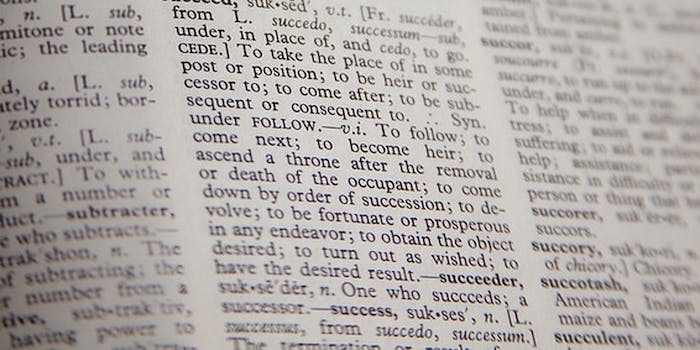 Your vocabulary just got bigger.

The English language just keeps getting bigger, and it’s mostly the Internet’s fault. Even Dictionary.com, the premier online destination for the lexically curious, can barely keep up with the deluge of webby terms social media churns out every day—but they try.

relating to a person who does not have a specific gender identity or recognizable gender expression.

anecdotal evidence based on personal observations or opinions, random investigations, etc., but presented as fact.

the deceptive tactic of simulating grassroots support for a product or cause undertaken by people or organizations with an interest in shaping public opinion.

characterized by predictable or unoriginal style, interests, or behavior.

relating to a person who has two gender identities or some combination of both.

a hacker who violates the security of a system for personal profit or for the gratification of causing damage.

a male computer programmer who is characterized as a bro.

an ambiguously worded headline whose meaning can be interpreted in the wrong way, as “Missing Woman Remains Found.”

criminal activity or a crime that involves the Internet, a computer system, or computer technology.

the portion of the Internet that is intentionally hidden from search engines, uses masked IP addresses, and is accessible only with a special web browser.

to publish the private personal information of (another person) without the consent of that individual.

relating to a person whose gender identity or gender expression is not fixed and shifts over time or depending on the situation.

relating to information on an electronic screen that can be understood quickly or at a glance.

a particular movement of the fingers or hand over a screen, used to control or interact with a digital device.

the study or use of tactile sensations and the sense of touch as a method of interacting with computers and electronic devices.

focused on a very small geographical community, as a neighborhood.

a subtle but offensive comment or action directed at a minority or other nondominant group that is often unintentional or unconsciously reinforces a stereotype.

mobile remote deposit capture: a method of depositing a check by using a mobile device to scan an image of it and transmit the image to a bank.

a 3-D effect observed when images and other elements in the foreground of a screen move at a different rate than those in the background.

sexually suggestive images of someone, typically a former romantic partner, that are posted online without the person’s consent.

to take an interest in a romantic relationship between fictional characters or famous people.

a computing device that resembles a wristwatch and is attached to a band worn around the wrist.

(especially among online video gamers) to cause a SWAT team to be deployed on an unsuspecting victim by falsifying a threat, often as a punishment or retaliation.

Got all that? Phew. This’ll be a lot easier a few years from now, when we all have automatically updating vocabulary chips implanted in our brains.