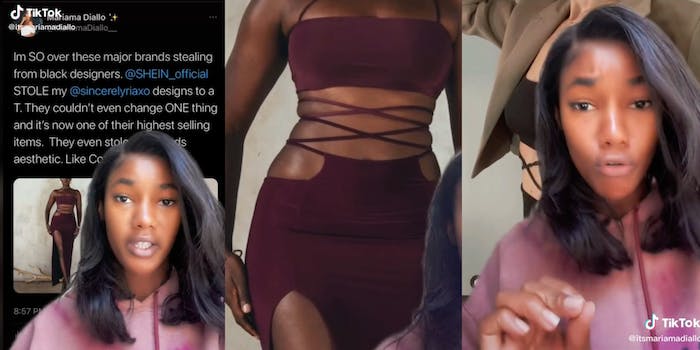 ‘I have to speak up’: Designer claims Shein, WeWoreWhat stole her design in viral TikTok

Both brands have been accused of stealing designs before.

Designer Mariama Diallo claimed fashion brands Shein and WeWoreWhat stole an exact design from her Sincerely Ria brand in a viral TikTok. Both brands have been accused of copying designs previously.

“I was scared to do a video about this, but I have to speak up,” Diallo said in the TikTok. “Shein stole my Sincerely Ria designs to a T. Guys, they didn’t even change not one thing.”

The video shows screenshots of Diallo’s tweets from June 11 comparing the visibly identical garments, which both include strappy one-shoulder tops and long skirts with crossing ties at the waist.

“And then, look at theirs! It’s so cheap you can see her underwear,” Diallo continues in the video. “They even stole my brand’s aesthetic, tried to use a model who looked Black.”

Diallo says in the video that she began designing the garments in January 2020 and released them last November. Shein reportedly released their product in June, according to Diallo.

She also discovered that WeWoreWhat, a fashion brand founded by influencer Danielle Bernstein, had a similar design to her own.

“WhoWoreWhat, another brand who’s known for doing this, stole my designs, too,” Diallo says in the video. “Guys, how can I even keep up?”

Many TikTok users commented calls to boycott the brands.

“I’m so sorry love, I will not buy from them,” one person said.

“We need to stop buying from these,” another wrote. “They are [stealing] from our community & keeping us from building wealth as a collective. Put your money where it matters.”

An investigation by Insider in January found that Bernstein has received nine public accusations of ripping off other designers since 2018. Page Six reported another in March. Diallo’s claim adds to the seemingly growing list of complaints.

Similarly, fast-fashion behemoth Shein was accused of stealing from Emma Warren Design in August 2020, according to the Independent.

The Daily Dot reached out to Diallo and Bernstein for comment and was unable to contact Shein.