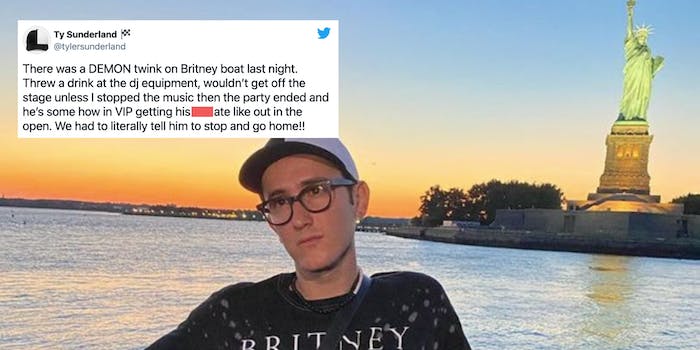 'He would've been kicked out but we were on a boat. Wish him the best!'

A disruptive partygoer dubbed “Demon Twink” on a Britney Spears-themed boat party was called out by the DJ of the event and was later turned into a meme on Twitter over the weekend.

Ty Sunderland, a Brooklyn-based DJ known for his themed parties in New York City, tweeted “There was a DEMON twink on Britney boat last night. Threw a drink at the DJ equipment, wouldn’t get off the stage unless I stopped the music.” He continued, “Then the party ended and he’s somehow in VIP getting his ass ate like out in the open. We had to literally tell him to stop and go home!!”

Sunderland said in a subsequent tweet that he “wouldn’t have cared if he didn’t throw a drink at me and fuck up my microphone and DJ equipment.”

The “Demon Twink” remained unidentified until one user posted a video of a partygoer whom he claimed was the person in question on Twitter. However, the Daily Dot cannot independently confirm this was the “Demon Twink.”

Memes and jokes were made about the disruptive partier and the phrase began trending in New York on Sunday after some high profile Twitter users got in on the joke.

Zola screenwriter Jeremy O. Harris—who has experience adapting Twitter drama to film—joked, “I have no interest in writing a ‘Demon Twink’ anything unless [pop musician Troye Sivan] is playing him.”

The Twitter drama made its way to Sivan who responded with a quip of his own, tweeting, “Literally so what if I got my ass ate on a boat in New York, sue me.”

At Sunderland’s weekly “Ty Tea” party hosted after the Britney boat, his friend and winner of season 10 of RuPaul’s Drag Race, Aquaria showed up to the party in “Demon Twink” attire.

On Sunday, Sunderland tweeted that he wasn’t mad at the disruptive partygoer. “If I was him, I’d capitalize on the name and make merch,” he tweeted. “He would’ve been kicked out but we were on a boat. Wish him the best!”

Update 12:50pm CT Aug. 3: In a statement to the Daily Dot, Sunderland said he has not been in contact with the “Demon Twink” and does not know who he is.

“I don’t want to know and I’m moving on from the situation!” he said.