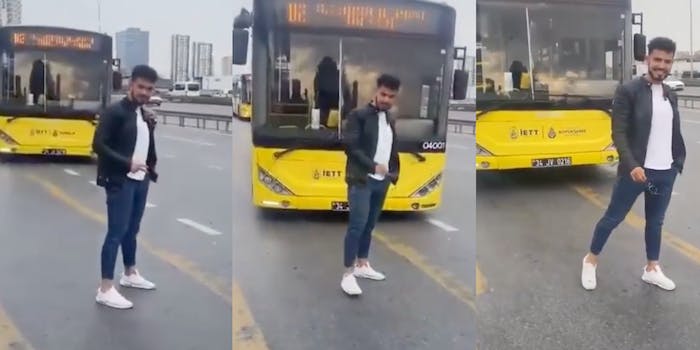 There is no shortage of dangerous, unwise TikTok challenges. Numerous people have died attempting one online stunt or another, but a man’s recent participation in a harrowing TikTok takes things to a new level.

Turkish user @onurnayir appears in an April 30 TikTok, which has been deleted from his profile, posing in front of a moving bus. On a busy highway, no less.

The brief clip sees him wandering onto a multi-lane highway as a bus approaches from behind. It appears the driver was preparing to stop, so they manage to hit the breaks fast enough to avoid crashing into him. The video concludes as @onurnayir shoots a brief, anxious look back at the bus before sauntering forward and striking a pose.

The video collected more than 1 million views on TikTok before being deleted, according to Newsweek. On Reddit, where it quickly migrated to r/facepalm, a place to share the “stupidity of people online and IRL,” the video promptly went viral. It has amassed upward of 17,000 upvotes in four days, along with a slew of vicious comments.

Commenters on Reddit had little patience for @onurnayir’s antics. Many noted that his TikTok page is rife with videos of this kind, though many of the more potentially deadly clips are now offline. Still, @onurnayir’s page is overflowing with footage of the young man posing around vehicles. It seems to be the only kind of video he makes. Whether he’s wandering in front of them, exiting them, or just being near them, @onurnayir seems to really like cars.

Dozens of viewers shared their hopes that @onurnayir will learn a non-deadly lesson at the hands of an oncoming vehicle.

“Survival of the fittest” was a commonly voiced observation, as many viewers noted that “natural selection” should really take this guy out of the gene pool.

“If having a death wish was a person,” one viewer observed.

One commenter pointed out that it only takes one miscalculation on the part of someone like @onurnayir to leave a stranger “traumatised for the rest of his life because he killed a person.”

“If they disregard their own life and seek to do extremely stupid things that only endanger themselfs, thats all fine,” user Single_Core wrote. “But to include others in these stupid and irresponsible actions should be punished. Harshly in my opinion.”

While this challenge does not appear to have gained a foothold on TikTok, viewers couldn’t help but worry that videos like @onurnayir’s may inspire foolish copycats.