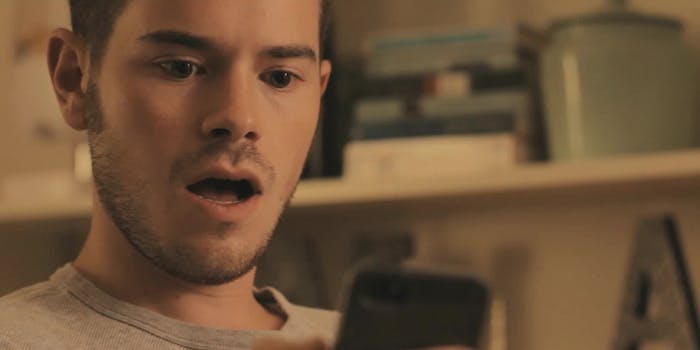 Is this the death of Tinder?

The picture is pretty bleak.

Only time will tell for sure, but it looks increasingly likely that March 2015 will be noted as the month Tinder began to die a prolonged death. The matchmaking app may be adding new users and making more connections every day, but a sea change in how its business is perceived by both financial analysts and users indicate that Tinder is besieged; its future looks less than bright. Since its launch in 2012, Tinder has been a hot commodity, racking up immeasurable amounts of media coverage and winning TechCrunch’s Crunchie Award for Best New Startup of 2013—so why have its fortunes changed?

First of all, Tinder has a demographics problem. A study released last month found that 62 percent of swipers are men; in theory, that should make female users highly sought-after by their male counterparts (let’s leave the gays out of this for right now), and if you look at the numbers, that appears to be true. As reported in the New York Times, men swipe right 46 percent of the time, while women do it only 14 percent of the time, which suggests that even though they’re being more selective, they should have no shortage of suitors to choose from.

But Tinder doesn’t work like that. As Mic’s Kate Hakala argued, men and women use the app differently, with men being much more likely to play it as a game rather than a means to an end. And while that may not have made much of a difference for a while, signs of fatigue are starting to show.

Signs of fatigue are starting to show.

In the past couple of months, we’ve seen a considerable amount of Tinder backlash on the Internet, with various writers weighing in on the app’s shortcomings or explaining why they’ll be swiping no more. “Tinder is fun and lighthearted until it no longer is,” wrote Dayna Evans on Gawker. “Tinder had bludgeoned my brain, stripping all the fun out of seeking chemical attraction in real life and in real places.” That’s pretty bleak.

Look elsewhere online and you’ll find no shortage of similarly despairing accounts, all of which are spreading the same message: Tinder is a waste of time. The more that opinion spreads, the bigger the problem the company is going to have to face.

Meanwhile, Tinder also has business problems to deal with. Since its launch, the app has been free to use and free from advertisements, so it’s been generating no revenue. Yet just as Tinder Plus, the app’s new premium subscription service was about to launch, Morgan Stanley issued a rather pessimistic take on Tinder’s future to its clients last week: “[W]e believe Tinder will not have much success monetizing with a high-cost recurring monthly subscription offering.”

The takeaway? Do not invest. And if that opinion spreads, Tinder will have another battle to take on.

The issues above might be rendered moot if Tinder Plus addressed users’ underlying concerns and improved the overall experience, but instead it rather cynically attempts to capitalize on its users’ addictive tendencies, allowing them to undo mistaken left swipes, have unlimited right swipes, and the ability to change location to have a limitless parade of faces to approve or reject.

The takeaway? Do not invest.

At the same time, its rollout in the U.K. and the U.S. has been a PR debacle thanks to its pricing structure, which charges older users (over the age of 30 in the U.S.) double what younger swipers pay. Tinder’s argument is that younger people have less money to spend, so they should be charged less; regardless of whether that argument is valid, the unintended effect of the dual pricing has been the alienation of a considerable segment of its users. Even people who were never considering paying a cent for Tinder Plus are annoyed by the ageist pricing, potentially augmenting their already unsatisfactory feelings toward the app.

At the same time, the experience of using Tinder’s free version has gotten worse. Aside from not including the undo button or an adjustable location, its users are now limited in how many people they can “like” in a 12-hour period. While that number is said to vary from user to user based on an algorithm, the company has claimed that “the vast majority of our audience” would never reach their limit. Still, within a few days of Tinder Plus’s launch, it seemed, on social media anyway, that many users were in fact hitting that ceiling, which is yet another factor that has the potential to damage perception about the app.

Curiously, ads have yet to be introduced to Tinder, but they are most certainly coming sooner than later, and they also have the potential to create a negative experience for users.

One has to wonder why Tinder didn’t jump into selling ads months or even years ago; the fact they’re relying primarily on paid subscriptions reflects either a severe arrogance about the value of their product or a gross miscalculation of their users’ behavior, or perhaps both. Had Tinder done things differently, they could have introduced ads a long time ago, starting earning revenue then, and also bringing new users into an experience already populated with ads. After staying ad-free for so long and adding them to the app at a time when its usage is approaching peak levels in some countries, the change likely won’t be welcomed with open arms. That could have been avoided.

It would be easy to dismiss all of the above as growing pains, challenges that can be overcome with a few tweaks to subscription pricing and algorithms; however, Tinder’s problems are systemic and deeply ingrained in its DNA. The app was conceived as a Grindr for straight people but quickly, and unexpectedly, turned into the de facto resource for casual dating. That was a happy accident for its overseers, but only so long as Tinder didn’t need to make any money. Now it needs to pay some bills, but the timing couldn’t be worse, as it coincides with user fatigue and a lack of investor faith.

It’s hard not to see tough times ahead for Tinder.

With trouble on all fronts, it’s hard not to see tough times ahead for Tinder, but to be clear, it’s not going to disappear anytime soon. Its growth will continue for some years before tapering off, and it may, with some luck, eventually figure out a way to make investors and users happy. Meanwhile, it will continue to have its supporters. BuzzFeed’s Doree Shafrir recently argued that it offers the best way for singles over the age of 30 to find relationships, after a psychologist penned a similarly enthusiastic take.

And people will continue to find dates and maybe even relationships on Tinder. Just as people have different dating styles and preferences, so too will some people find that Tinder continues to work for them.

But the Tinder of tomorrow will not be the Tinder of today or yesteryear. The mindless fun is in the process of giving way to something less pleasant, and the social phenomenon will cease to be that. If this is Tinder 2.0, whatever 3.0 and 4.0 end up being will do little to evoke the fun we all had when we first used the original. Millennials, fickle and novelty-seeking, will move on to the next great dating app, perhaps one that’s less of a game, and our thumbs will be grateful that they no longer have to swipe so much.