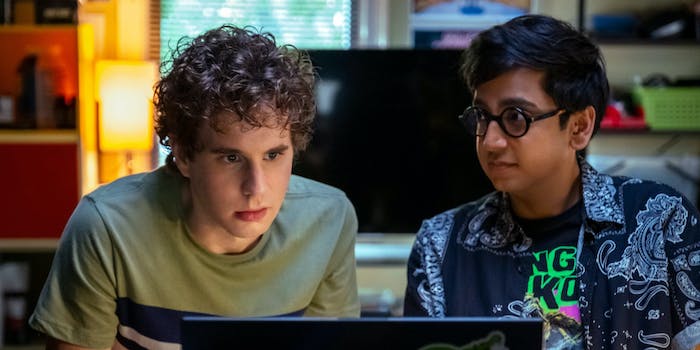 It's a new spin on a months-long criticism.

When the first trailer for the film adaptation of Dear Evan Hansen debuted a few months ago, much criticism was directed towards star Ben Platt for not looking like he could play a teenager. But after the film’s debut at the Toronto Film Festival and its release date looming, the aging discourse is making the rounds again with comparisons between two different mediums.

Director Stephen Chbosky defended the choice to keep Platt in the role when the first look at the film debuted in May, noting that “I couldn’t imagine anybody else playing it”. Following the backlash, Platt tweeted (and then deleted) a response in which he referred to those critics as “randos being jerks.”

But initial reviews of Dear Evan Hansen out of TIFF have not been kind. While some of those reviews pointed to the repugnant elements of the plot, highlighted for a much bigger audience than the Broadway show had, others also noted Platt’s casting among the film’s issues. Even though Platt, who originated the role of Evan Hansen on Broadway, has long been praised for his performance and has won multiple awards for it, it was also something of a detriment for some critics: Evan Hansen’s repugnant acts tend to feel even more gross and sinister when Evan himself doesn’t exactly look like a teenager anymore.

Essentially, what might have smoothed things over for theater-goers back when Platt was on Broadway don’t necessarily work on the big screen. And in the days since the TIFF premiere, that sentiment is being depicted with a meme comparing Broadway vs. film adaptation.

The meme itself is more or less a remix of things we’ve seen before. It’s a retread of the initial “how do you do fellow kids” reaction to Dear Evan Hansen’s trailer. It takes two images and compares them to one another. And, most importantly, it’s an indicator of time, no matter how exaggerated it might be in reality.

And given that we’ve had our fair share of actors reprising roles—as well as vast time jumps, in the case of the Titanic reference—it wasn’t hard to depict what could happen in the five years between Dear Evan Hansen launching on Broadway and the film debuting in theaters.

And one iteration even went meta, comparing Platt’s Evan Hansen to Kevin Spacey, who parodied the musical when he hosted the 2017 Tony Awards.

Soon enough, we’ll get to see for ourselves just how Dear Evan Hansen executed its gargantuan task in adapting the hit Broadway musical and how well Platt works in the role—the film releases in theaters on Sept. 24. But until then, at least the memes are timeless.