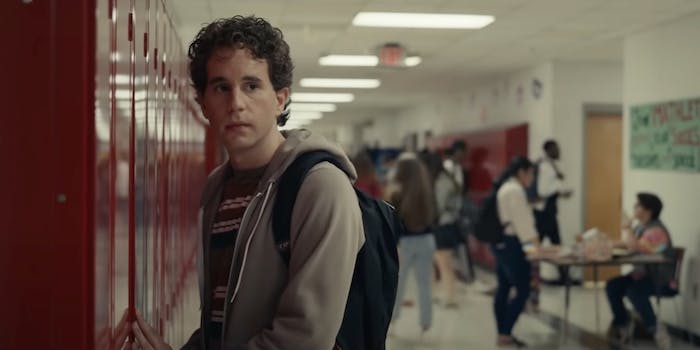 Ben Platt is reprising his role from the Tony Award-winning musical.

It’s a common practice across TV, movies, and the stage that many of the actors who play characters in high school are older than the characters they’re portraying. At its best, you might think an actor is high-school age until you look them up later on, but at its worst, you can immediately tell that actor is not a teenager.

But with Dear Evan Hansen, Universal Pictures’ film adaptation of the Tony Award-winning musical, the effect is jarring in the trailer, leading to plenty of memes.

Ben Platt, who is 27, originated the role of Evan Hansen on Broadway. Years after his performances garnered him a Tony, a Grammy, and a Daytime Emmy when he performed a song from the musical on The Today Show, he stepped back into Evan Hansen’s cast in director Stephen Chbosky’s film adaptation. While some fans worried about how the show (which was controversial among some viewers) would translate to the screen, much of the main chatter around the first Dear Evan Hansen trailer had more to do with the fact that Platt appeared to be too old to convincingly portray the 17-year-old high school student.

It’s not the first time Platt has portrayed a high schooler in recent years: In Ryan Murphy’s satire The Politician, Platt played a high school student running to be class president in the first season, which debuted in 2019. But even in this small glimpse of Dear Evan Hansen, the effect of Platt portraying a high school student doesn’t work as well. Platt’s Evan Hansen, who has social anxiety, is constantly hunched over, has bags under his eyes, and he appears to be wearing an ill-suited wig (although Platt told Vanity Fair that he grew his hair out). All of this stands out much more in scenes where Evan Hansen is literally in the spotlight.

Platt is also playing against several other actors who are in their 20s while portraying high school students to greater effect, which makes his presence stand out far more.

People immediately drew comparisons to that “How do you do, fellow kids” scene from 30 Rock in which Steve Buscemi’s character attempted to infiltrate a high school as a police officer.

Others compared him with other actors who outgrew the high school-aged characters they played (or pretended to play within the context of the story) in movies such as including Grease, Never Been Kissed, and Jack. In other cases, such as Elf and Billy Madison, the visuals of one actor being completely out of place are far more intentional.

There’s also an argument that casting someone older to play a teenager unintentionally makes Evan Hansen’s actions—which includes lying about the nature of his relationship with a classmate who died by suicide, including to the classmate’s family—even more reprehensible.

In an interview with Vanity Fair released alongside the trailer, Chbosky defended casting Platt in the role that made him a star and insisted that he didn’t even think about casting another actor to play Evan Hansen.

“You just have to hear him sing the songs,” Chbosky explained. “His understanding of the character is so complete and so profound. I couldn’t imagine anybody else playing it. It’s his part. I felt very strongly about it. And to me it was never even a consideration.”

Dear Evan Hansen will debut in theaters on Sept. 24.