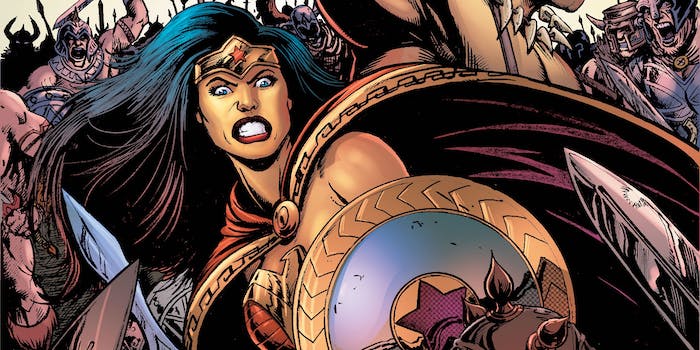 The announcement comes after a former DC artist made $1.85 million from Wonder Woman NFTs.

There’s already a lot of controversy around NFTs (non-fungible tokens), a new financial craze that combines the appeal of cryptocurrency with the massive cash flow of the fine art market. Some people are making stunning amounts of money from these transactions, like a (freely available) Nyan Cat meme selling for $600,000 at auction. Others describe the NFT market as a pyramid scheme that doesn’t benefit the majority of artists and offers massive risks to potential investors.

So what does this mean for creative brands like DC Comics, whose intellectual property is already appearing in NFTs?

DC hasn’t made a public statement about NFTs yet, but last Friday an internal letter from Senior Vice President of Legal Affairs Jay Kogan leaked online. Directed at DC creators, the letter reminds freelancers that they’re not allowed to sell DC Comics art “with or without NFTs.”

There’s a certain amount of informal flexibility around selling fan art at conventions and online, but the big money of NFTs led DC to sit up and take notice. This letter also mentions that DC itself is “exploring opportunities to enter the [NFT] market.”

Earlier last week, 87-year-old artist José Delbo, who illustrated numerous comics from the 1960s to the 1990s, collaborated on an unlicensed Wonder Woman art NFT sale that netted $1.85 million. Similar to other NFT sales, this auction offered the non-commercial rights to some new digital art. This art can be distributed freely online, and the buyer merely owns a digital copy and a certificate of authenticity. It is effectively a new way of using art as currency, which is how some high-end buyers use the fine art market. The issue of copyright is murky at best.

Needless to say, DC Comics isn’t happy with this development. And this massive publisher isn’t the only one complaining about DC characters being used for NFTs. Marsha Cooke, the widow of comic book artist Darwyn Cooke, spoke out against her husband’s work being used for NFTs, citing the market’s damaging environmental impact. Some of Cooke’s work has already been used for NFTs, in a collaboration between DC and the VeVe app. They’re releasing a series of 3D digital “statues” based on classic DC art.

DC embracing the NFT craze is an unavoidably controversial move, with one popular tweet labeling it “pure Lex Luthor shit.” In addition to the very real environmental impact of NFTs and cryptocurrencies, DC’s NFT program seems like another way for the publisher to make bank while the artists don’t. Despite the high-profile nature of DC and Marvel media, comic book creators aren’t paid very well. That especially goes for freelance artists, who are namechecked as an “integral component” of DC’s NFT plans in the leaked letter.