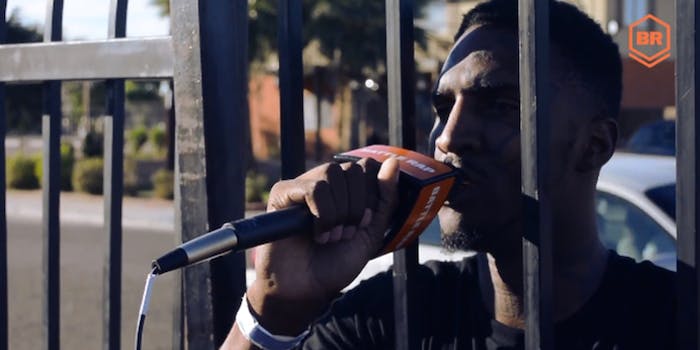 Forgetting dropping the mic—this rapper tried to drop a deuce

On Saturday, a battle rap competition took place in Phoenix, Ariz., titled “Duel in the Desert.” While the majority of rappers actually battle-rapped, one in particular engaged in a more esoteric performance.

Daylyt, a rapper from California, is apparently known in battle-rap circles for his antics and for doing everything but rapping on stage. He did not disappoint. According to website Battle Rap, he took the stage dressed in a black cloak. When it was time for him to battle his opponent, Real Deal, he took the performance a step further.

In the third round, Daylyt told the crowd that fans had expected Real Deal to “take [Day’s] head off” and then said that he’d already done it himself. He removed his cloak to reveal a decapitated head (that rolled onto the stage) leaving just his bloodied neck.

Daylyt did eventually engage in some rapping, but it was met with heckling and boos. He reportedly told the crowd, “If I hear two more boos, I’ma take a boo boo on stage.” And then he pulled down his pants and tried to drop a deuce. He was swiftly escorted out of the venue. Daylyt also allegedly threatened to poop onstage during a battle last year.

Security pulling @daylyt2k14 off this stage before he could shit. He’ll get it someday.

Battle Rap interviewed Daylyt after he was removed from the venue and forced to perform from behind a gate. It might have been the best part of the whole event.

You can find many more clips of Daylyt offering his opinions about rap and performance. He’s certainly elevated shit-talking to a whole new level.