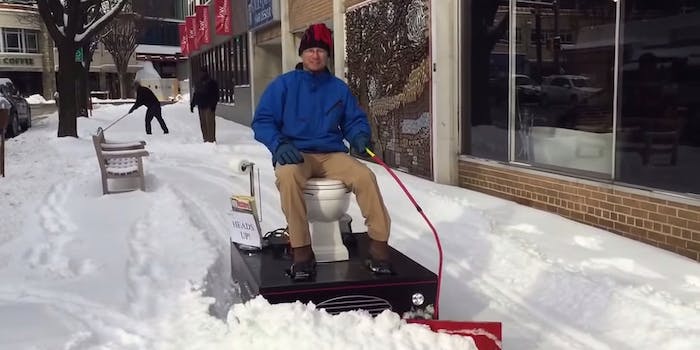 This blizzard hero is dumping snow with a motorized toilet plow

David Goldberg got in the No. 2 position to make a crappy situation less so.

In order to tackle the latest snowstorm to hit Bethesda, Md., David Goldberg got in the No. 2 position to get the job done.

The hardware store owner already had the Loo-cy, a hybrid motorized toilet that he first built for the D.C. Pride Parade and adapted it for different motor shows in the area. When winter came, Goldberg installed a snow plow to the front of the car to make a crappy situation less so. Like most bathroom setups, it’s even got a toilet paper stand and a magazine rack.

Goldberg sat upon his porcelain throne Tuesday after a storm brought four inches of snow to his store’s doorstep, and as much as people have already stopped and laughed, it’s made dumping the snow elsewhere a hell of a lot easier.

“Taking something very private and making it a spectacle is a jolt to the system by itself,” Goldberg wrote. “But having it plot snow… Over the top!”