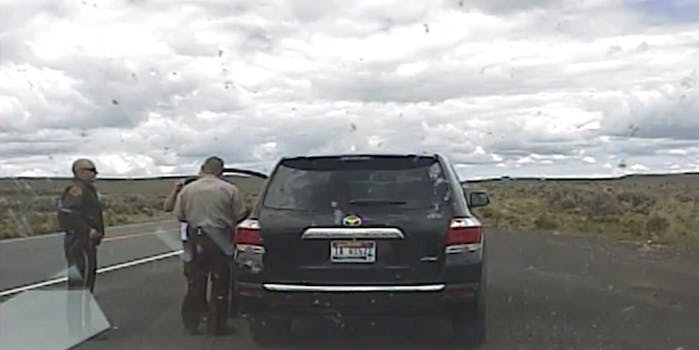 An animal rights activist made a public records request for video of the officers who harassed him.

If you’re engaging in illegal activity, the last thing you want to do is accidentally videotape yourself confessing to it. That’s especially true if you’re a police officer.

On Tuesday, Steve Hindi, activist and president of the nonprofit group Showing Animals Respect & Kindness (SHARK), posted footage taken from a police vehicle dashboard camera to his YouTube channel in which two deputies of the Malheur County, Ore., sheriff’s office admit to pulling him over illegally for the sake of intimidation.

Hindi had been present at the Big Loop Rodeo in Jordan Valley on May 19, 2013, to photograph and film instances of animal abuse. He was quickly asked to leave by the event’s organizers.  After his expulsion from the event, Deputies Brian Belnap and Brian Beck, on orders from their supervisor Lt. Rob Hunsucker, proceeded to tail Mr. Hindi’s vehicle for about 10 miles before pulling him over.

The animal rights activist recorded the whole incident and posted it to the video-sharing site. He was let go without having been issued a traffic violation but was told that he would be arrested if he returned to the rodeo.

Not content with the video he’d shot, Hindi filed a Freedom of Information Act request for the dash cam footage. What he got back was more than he could have wished for.

In the video—a condensed version of it is posted below and the full version is available on Hindi’s channel—Belnap and Beck openly acknowledged that they pulled Hindi to intimidate him.

“We’re gonna be in a world of hurt here,” one of the officers is heard saying. “All because of that rodeo board, you know that right?”

Eventually, after it’s too late, the cops realize that their camera was still on.

This illegal stop has received massive attention online.  The incriminating clip shot to the top of Reddit‘s r/justiceporn—the social news site’s forum that highlights incidents in which justice is served—on Tuesday, receiving more than 3,000 karma points and getting more than 1,200 comments.

According to the Associated Press, Brian E. Wolfe,  Malheur County Sheriff, has also asked the FBI to look investigate the matter.

“We are sending all information and recordings that we have (to the FBI) and they will look at it,” he told the news agency. “I want to make sure nothing was wrong.”

Wolfe also confirmed that none of the officers involved had been disciplined or removed from their duties.