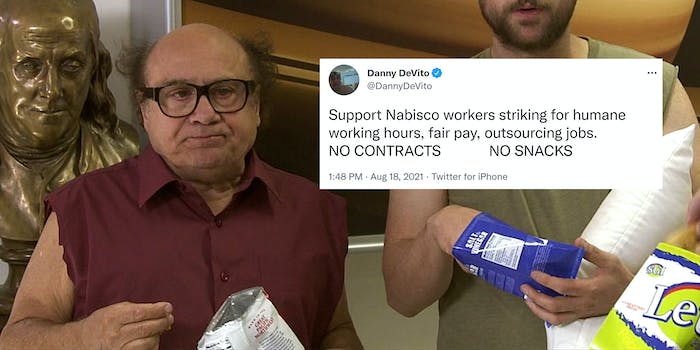 Danny DeVito briefly lost his blue checkmark on Twitter Thursday, just after tweeting his support of the striking Nabisco workers.

Tweeting out the succinct slogan “No contracts, no snacks,” DeVito summarised the strike as a matter of “humane working hours, fair pay, outsourcing jobs,” leaving no ambiguity as to his opinion on the snack food giant’s treatment of its workers. Soon after that, the blue checkmark beside his name disappeared, giving the Hollywood star’s official account, including his tweet in support of the strikers, the appearance of a parody account or one of the many celebrity impersonators found on Twitter.

DeVito’s fans and people standing in support with the striking workers had questions for Twitter about its decision to strip DeVito’s account of verified status.

DeVito’s blue checkmark was quietly reinstated. However, as many on Twitter have now pointed out, the news of Devito’s de-verification going viral has massively increased awareness, and support, of the Nabisco strike, and the numbers only seem to be increasing.

A Twitter spokesperson told the Daily Dot that DeVito’s account was “debadged temporarily because the account’s information was incomplete,” meaning that it required the confirmation of an email address or phone number.