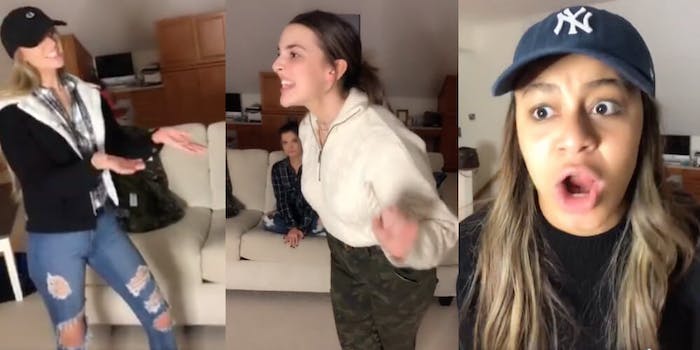 The girls embodied their mothers and Abby Lee Miller for the video.

The legacy of Dance Moms lives on. The iconic dance show, which followed Abby Lee Miller and the young dancers of her eponymous dance company, saw its ups and downs over the years. There have been instances of mothers fighting each other, and of course, Miller, verbally attacking both the mothers and her young dancers.

The drama became so much that, for season 7, most of the girls and their mothers walked off the show, leaving Miller and the show to find a whole new set of dancers for its eighth season. But now, one of the former original girls, Brooke Hyland, has reunited with her old dance team on TikTok, though it wasn’t for a dance routine. It was to recreate the moment when her mother Kelly Hyland hit Miller in the face.

The video was reposted to Twitter, where it amassed over 200,000 likes and nearly 40,000 retweets in two days.

THE GIRLS FROM DANCE MOMS MADE A TIKTOK OF WHEN KELLY HIT ABBY LMFAOOOOOOOOO IM DYING pic.twitter.com/OValg23OkS

In the comments, Dance Moms fans are reminiscing, as well as sharing some of their favorite moments from the Lifetime show.

Another pointed out how grown all the girls now look.

“Lmao I love them so much,” Twitter user @3dogs1baby wrote.

The girls, who made a name for themselves on the hit show, have gone on to do big things. Maddie Ziegler, one of Miller’s star dancers, is now known for her work with Sia; Jojo Siwa, whose mother always had disagreements with Abby, is now a teen idol in her own right; and Sioux had a brief stint on Bold and the Beautiful.