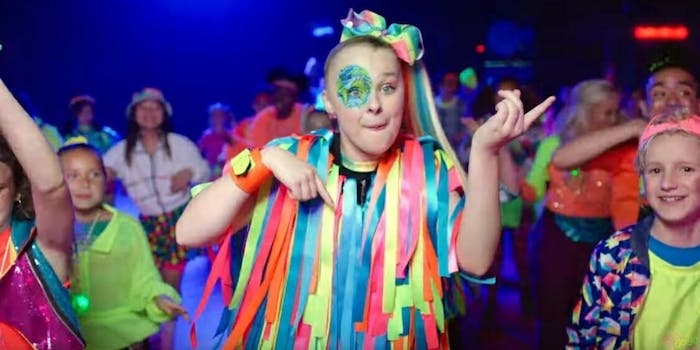 A day after it was revealed that a popular beauty YouTuber’s lipstick contained mold and hair, another YouTube star’s makeup line has been recalled because it contains asbestos.

According to the FDA, JoJo Siwa Makeup Set, sold at Claire’s, tested positive for asbestos—which can be found in talc and which can lead to respiratory illness, including lung cancer. Claire’s said in a statement, via CBS News, that the FDA “indicated the possible presence of trace amounts of asbestos fibers in the powder eyeshadow element of the [Siwa] kit.”

As noted by Page Six, Siwa’s recalled makeup set included nail polish, a pair of lip glosses, an eyeshadow palette, and a mirror.

Earlier this week, YouTube star Jaclyn Hill faced plenty of backlash for her makeup products after fans said they found mold and other fibers in and on her lipstick. Hill responded by saying, “If any of you are receiving lipsticks like this…. Please know that this is NOT hair. My factory used brand new white gloves to do quality control & they shed all over my product. We switched to rubber gloves 2 days ago & will make sure this never happens again.”

So far, Siwa hasn’t publicly commented on her makeup line recall. But Claire’s, which caters to younger girls, said it supported Siwa’s product even though it voluntarily took it off the shelves.

“Claire’s stands behind the safety of this item and all other Claire’s cosmetic items, as such small trace amounts are considered acceptable under European and Canadian cosmetic safety regulations,” the company said in a statement. “In addition, last year Claire’s moved to talc-free cosmetic manufacturing to prevent any further concerns about talc contamination. Claire’s also supports increased FDA oversight of personal care products. We will provide a full refund to any customers who purchased the product.”

In March, the FDA said it had found asbestos in three other makeup products sold at Claire’s.