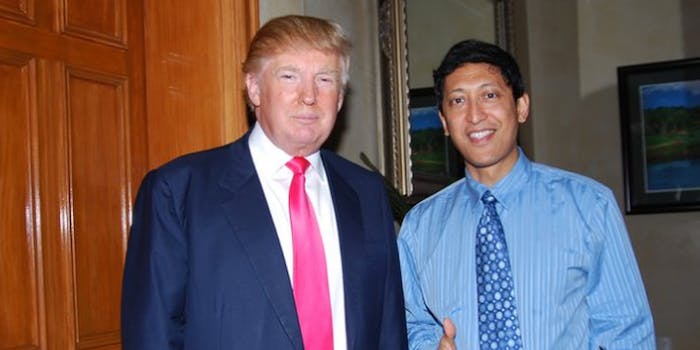 Comedian arrested for punching reporter who tweeted about him

Dan Nainan filled out his brief set with quips about Hurricane Katrina and the Asian race's inability to "distinguish between letters L and R."

A comedian performing in Washington, D.C., last night was arrested for punching Newsweek‘s Daily Beast reporter Josh Rogin. In the face. Because of comments about the comedian’s performance that Rogin made on Twitter.

The comedian’s name is Dan Nainan. (He’s the guy in the photo above, on the right, who is not Donald Trump.) and he was performing last night a club called DC Improv. Rogin was at the performance throughout and, via Twitter, took issue with some of the off-color jokes in Nainan’s set.

According to Rogin’s Twitter feed, Nainan, who’s Indian, filled out his brief set with quips about Hurricane Katrina and the Asian race’s inability to “distinguish between letters L and R,“ among other topics.

Ten minutes after pointing out that Nainan made the crack about the Asians, Rogin returned to Twitter to write that Dan Nainan had punched him in the face.

Dan Nainan just punched me in the face. Not a joke.

According to local gossip website Washington Whispers, who attended the event alongside Rogin, Nainan approached Rogin shortly after his show and asked if he was in fact Josh Rogin. When Rogin said yes, Nainan punched him in the jaw, pushed him, then walked away, turning around 10 seconds later and punching him again.

He was detained by club bouncers immediately, and Rogin called the police, who showed up and arrested Nainan on the spot.

Nainan, who maintains 480,000 Twitter followers of his own, didn’t seem too affected by the incident. Shortly after midnight, he tweeted that he’d “had a blast headlining the DC Improv,” adding half an hour later that he was back at his hotel in nearby Bethesda.