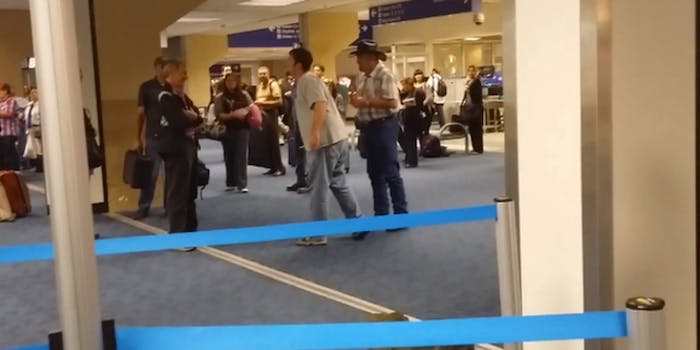 The justice is quick.

Airline travel is stressful enough, what with security checks and delayed flights, but one passenger at the Dallas/Fort Worth International Airport airport recently crossed all the lines.

In a video captured by another passenger on Oct. 23, a man in a T-shirt and jeans can be seen vocally harassing a fellow passenger at the ticket desk, then physically taunting him. As the harasser gets more and more animated, several people step in to help get the situation under control. One man in a cowboy hat asks him why he’s so upset.

“Queers is what I’m upset about,” he responds, pointing to the man he was initially harassing. He then kicks the man, and the guy in the cowboy hat and several others take him down. Quickly.

It’s not clear what the context of the altercation was, or where the issue between the two men started. According to Dallas station WFAA, an aiport spokesperson confirmed the man was arrested, but did not give his name. Andrew Kennedy, the man who shot the video, told WFAA the man seemed troubled.

H/T If You Only News | Screengrab via Andrew Kennedy/YouTube