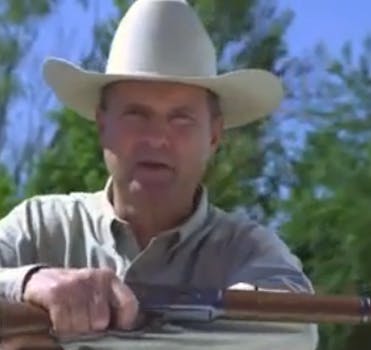 Peterson said he planned to pay for everything, but "nature called." He was headed towards the bathroom.

According to AL.com, the 68-year-old, “a farmer, businessman, cop” and “marine during Vietnam” whose 15 minutes of fame came two years ago when his ad campaign for Alabama Agriculture Commissioner became the most beloved ad on the Internet for a week, ate a can of cashew nuts, put the empty can back onto the store shelf, and then walked out of the store without paying for the cashews he ate.

It’s altogether harmless, but it’s altogether theft. Police booked the man at 3:27pm on a charge of third-degree theft of property. He was released three hours later after posting a $1,000 bond.

A Sam’s Club security guard told Hoover, Ala., police spokesman Capt. Jim Coker that he’d seen Peterson eat the cashews and tried to stop him as he walked out the door, but that his attempt was unsuccessful.

Peterson took to Twitter shortly after posting bond to explain the situation to his 2,000 followers.

“How, exactly, did @YHPolitics know about my day & my handful of cashews before my wife did?” he asked.

It’s worth noting that Peterson has somewhat of an alarming discount-shopping track record. In October, employees at a local Walmart stopped him after he aggressively pushed his shopping cart past a row of cash registers without paying for the beer and paper towels in it.

Peterson later told a radio station’s morning show that he planned to pay for everything, but “nature called.” He was headed towards the bathroom, he said.

Probably to poop out some cashews.