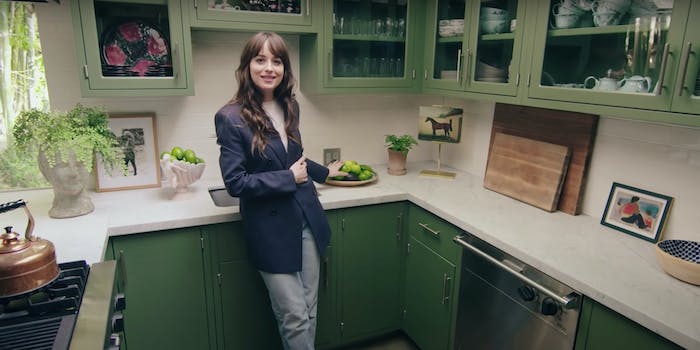 The iconic meme was a lie.

Back in March, Architectural Digest posted a video of actress Dakota Johnson showing off her home, which culminated in a display of limes becoming an iconic meme for Gen Z. But as Johnson just revealed, even the most innocuous of declarations might not be as real as they seem.

The Johnson in that March 2020 Architectural Design video? She loves the limes displayed in a kitchen filled with plants and cabinets painted green. But the Johnson of January 2021? Not so much.

Jimmy Fallon kicked off his interview with Johnson Tuesday night by gushing about the now-viral video and asked the question of what one does with all of those limes. As it turns out, she had no idea that she even had limes in her kitchen until she entered the room as part of the video tour.

“I was giving the tour and went into the kitchen and it was set dressing,” she explained. “Actually I’m allergic to limes. Yeah, I’m mildly allergic to them—and honeydew melons.”

Yes, Johnson, who previously professed her love of limes, can’t even eat them. Fallon, for one, was shocked. She later said that eating limes will make her tongue itch and noted that the limes were noticeable enough that she couldn’t really just ignore them.

“It was hard to just ignore them, so I just lied,” Johnson added. “Just lied and went the full opposite direction.”

And Fallon isn’t the only one taken aback by this sour development.