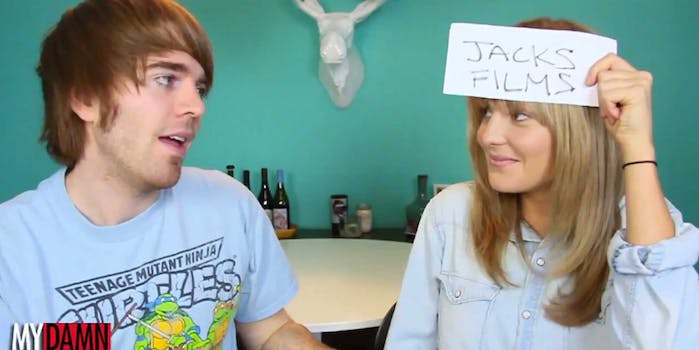 How good are these two YouTube stars at spoofing their friends and colleagues?

Imitation is the highest form of flattery, especially when you’re being portrayed on YouTube by fellow YouTubers.

Shane Dawson originally debuted his Celebrity Headbands Challenge—similar to Ellen DeGeneres’s Heads Up! app, but also a bit of a callback to the classic game show Pyramid—on his daily vlog channel in mid-June, but now he’s taken it over to Daily Grace during Grace Helbig’s latest video.

In the game, one player holds an index card with a celebrity’s name on his head while the other person has to get him to guess the identity on the card with hints and imitation. The players aren’t held back with words they can’t use or. In fact, the better the portrayal, the easier it is to guess.

Helbig and Dawson dove right into imitating their friends and colleagues (although they weren’t asked to imitate each other).

“I so badly want to look at what this is,” Helbig noted about the YouTuber written on her card after Dawson started laughing. “How did the people on Double Dare do this?”

But how well did they do? We break down their portrayals.

Dawson compared Helbig’s portrayal of GloZell to the moment in Tyler Perry movies a room full of people turn towards the one white girl in the room after she says something inappropriate. A bit awkward to behold.

Dawson nails down the loud voice and Turner’s tendency to block the camera with his hand, but he’s saying anything coherent.

It’s ultimately, actions, not words, that prompt this correct answer. If it was a game of Charades, it would be perfect. However, voice alone wasn’t enough.

Since Phan usually narrates her videos via a voice over, Dawson tries his best to sound girly as he explains his makeup tutorial while trying to talk through his teeth.

Helbig gets Johnson’s excessive use of switching which side of the camera he’s on through jump cuts perfectly, but as Dawson notes, that could be just about any YouTuber. It takes a few more aesthetic details for the correct answer to come up.

Initially sounding more like a chicken, Dawson goes for the simpler approach of imitating a “Your Grammar Sucks” video. It takes a mention of his Batman chest hair for Helbig to guess correctly.

Not even the clue of “you’ve kissed this person” can narrow it down for Dawson, who is under the impression that Helbig is imitating a 95-year-old woman with dentures.

Oakley’s mannerisms could be mistaken for both Helbig and Dawson, but the latter gets them down to a T.

The imitation is almost uncanny to the original, but the impersonation is even better when one of Dawson’s dogs stands in for one of Marbles’s dogs who frequent her videos.