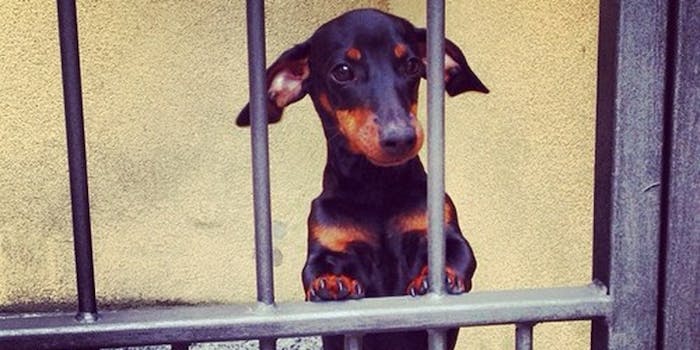 Tag caused a commotion downtown when he unleashed his overwhelming cuteness on unsuspecting strangers.

A puppy named Tag is behind bars this morning after allegedly causing a commotion downtown when he unleashed his overwhelming cuteness loose on unsuspecting strangers.

Victims reportedly experienced shortness of breath, swooning, and loss of vocal control (some who were caught in the so-called “cuteness vector” were unable to form coherent sentences, instead babbling things like, “Who’s dat cutie bootie puppy wuppy face?” or simply, “Awwwwwww!”) At least one victim was hospitalized for cuteness-related heart palpitations, which doctors assure The Fluffington Post is a real thing.

Police were called around 9am after the puppy held up traffic due to the large crowd of people jostling to pet, hug or otherwise touch the dog. Three people were treated for minor injuries in the scuffle to reach the puppy.

The dog is being held without bail at the county lockup and faces sentencing tomorrow. He is expected to plead not guilty.