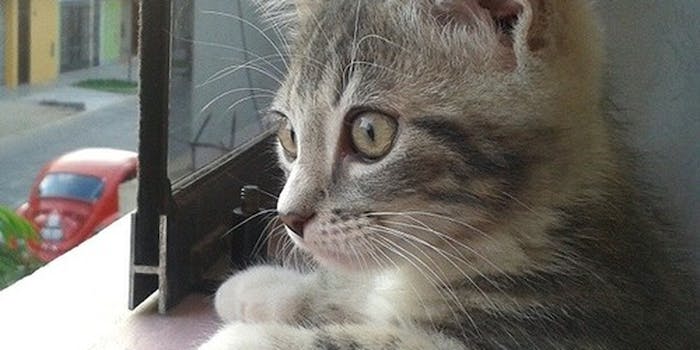 Concerned about security, Barnaby has taken matters into his own paws.

Barnaby the kitten was sick of having his car broken into, and because the police weren’t doing enough for his liking, he took matters into this own hands, er, paws.

The cat announced this morning that he was forming a neighborhood watch and is accepting applications.

“This is a nice neighborhood,” said Justin Dunn, a spokesperson for the watch group. “But when Barnaby had his collection of mix CDs stolen out of his car in broad daylight in November, the cops just told him him to file a report in case they found anything. He’s fed up.”

The kitten plans to create a smartphone app that will allow record and report any suspected crimes in progress.

Not everyone is on board with Barnaby’s plans.

“He’ll tell you this about reducing crime, recovering his Barry Manilow mixes or whatever,” said Susan Keller, a lawyer for Toby the Jack Russell Terrier, who live across the street. “But really, this is about Barnaby keeping an eye on the neighborhood dogs. He’s trying to get everyone else to do his dirty work for him. Who knew big brother was a cute little cat.”