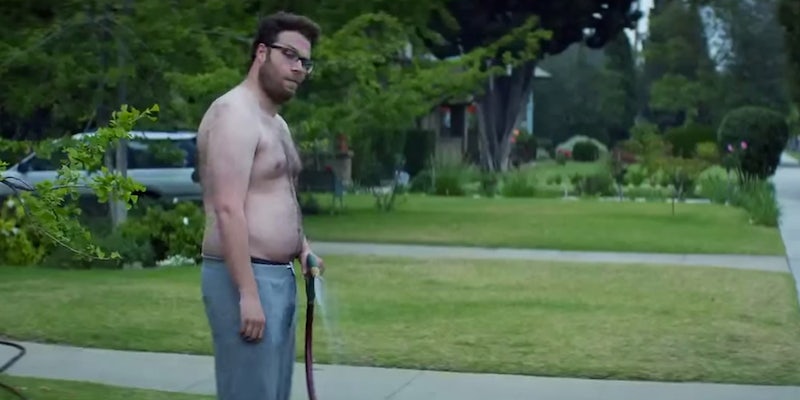 Dadbod has made men like Seth Rogen and Louis C.K. desirable. But there's one big problem.

I have dated not one, but two young men whom my friends have not unkindly referred to as the “Pillsbury doughboy.” I have written erotically charged thinkpieces about Vince Vaughn. And I’ve gotten into numerous screaming matches with my boyfriend begging him to order crème brûlée instead of espresso, or to sit and binge-watch Shark Tank with me instead of doing P90X plyometrics. It’s like dude bros preferring boobs to butts, or Law and Order: SVU viewers preferring ADA Alexandra Cabot to ADA Casey Novak: I simply have an innate, fixed predilection for larger men.

So naturally, I was thrilled when I first heard about “dadbod,” the male body type described by 19-year-old Clemson University student Mackenzie Pearson in a now-viral piece for the college publication The Odyssey. In her piece, Pearson describes dadbod thusly:

The dad bod is a nice balance between a beer gut and working out. The dad bod says, “I go to the gym occasionally, but I also drink heavily on the weekends and enjoy eating eight slices of pizza at a time.” It’s not an overweight guy, but it isn’t one with washboard abs, either.

Like most people who shared dadbod on social last week, I thought this was a pretty accurate summary not only of the physique I’m most attracted to, but a male body type that’s increasingly starting to gain mainstream attention. Considering we live in a world where Louis C.K. is considered a major sex symbol and Maria Bello, who is perhaps one of the sexiest women alive, is considered an appropriate casting choice to play Kevin James’s wife, it was only a matter of time before we had a word for the types of male bodies that are being trotted out and deemed sexually appealing onscreen.

But there was also something that struck me as distressing about dadbod, which few people who’ve parsed the phenomenon have apparently thought merited discussion. Even though dadbod has been in the collegiate vernacular for about a month or so—almost a decade, in Internet years—no one has come out in favor of the female equivalent, or “mombod.” If a slightly flabby, slightly less toned dadbod was now considered aesthetically appealing, wouldn’t it stand to reason that the female equivalent would receive its moment in the sun as well?

Of course, it’s no great shock that overweight women are greeted with a mixture of outright disdain and patronizing plaudits for “bravery,” while overweight men are deemed eminently bangable. It’s a cliche so obvious that it’s not even worth pointing out, but while doughy, amorphous, nebbishy men like Jason Segel can appear bare-assed in movies and still have starry-eyed college sophomores posting sexy GIFs of them on Tumblr, women like Lena Dunham and Amy Schumer are patted on the head and lauded for their courage when they have the audacity to wear a pair of boy shorts. We can talk till we’re blue in the face about how these women are revolutionizing Hollywood beauty standards and changing the conversation about female body image, but it’s still pretty clear that overweight men are held to an entirely different standard than overweight women.

It’s pretty clear that overweight men are held to an entirely different standard than overweight women.

With this in mind, one question remains: Is there actually a female equivalent to dadbod? And if so, does anyone find it sexually appealing? In an interview for Slate, Amanda Hess actually raised this question to Pearson, who responded that a mombod would likely be “thick. Not a big person, but just a thick person. Someone who isn’t too thin-looking, but has got some meat on her bones.” Ten points to Gryffindor for trying, Ms. Pearson, but anyone who has ever had a female friend knows that saying a woman has “some meat on her bones” is just a polite way of calling them fat, and it is clearly not intended as evidence of her bangability.

It’s not a problem in itself that dadbod is a thing, or that men with pot bellies and Droopy Dog bone structure and mild to moderate gynecomastia are being celebrated as sex objects, instead of being hazed in gym class for failing their presidential fitness tests. As a culture, we should constantly be striving toward wider acceptance of bodies of all shapes and sizes. If that means women are increasingly finding men who look like Louis C.K. attractive, then that is awesome—not just for men who look like Louis C.K., but for the body acceptance movement in general.

That said, it’s undeniable that the same traits associated with dadbod—a soft stomach, sagging breasts, a sour-milk-white torso that looks like it hasn’t seen the inside of a Crunch Fitness since the ‘90s —are considered unattractive in women, even while they’re being celebrated in men.

The problem is that dadbod exists in a culture that continues to tell women to embrace their curves and love their bodies, while simultaneously holding up “curvy” women like Sofia Vergara and butt selfie queen Jen Selter as paragons of a healthy body image. The problem is that while women are under constant pressure to hit the gym and regain their former shapes the second they pop a yawling infant out of their snizzes, men live under the constant reassurance that no matter how much PBR they drink or how many slices of pizza they eat, women who look like Cameron Diaz and Maria Bello and Rose Byrne will still have sex with them.

Men live under the constant reassurance that no matter how much PBR they drink or how many slices of pizza they eat, women who look like Cameron Diaz will still have sex with them.

If dadbod is a thing, then of course mombod should be a thing too. But women with stretch marks and sagging breasts or Caesarean scars—the ultimate, literal signifiers of being a mom and having a mombod—are not only deemed totally unfuckable, they’re punished when they showcase these traits on social media. And when you consider how much shit women like Pink, Clarkson, and Selena Gomez (who is not a mom, but whose curvaceous yet still incredibly tiny body Pearson would probably describe as a mombod, according to her own loose definition) get on social media, well, suddenly cracking jokes about finding Kevin James’s manboobs sexy isn’t really that funny.

But the biggest problem with dadbod, in my opinion, isn’t that it’s inherently sexist. It’s the way Pearson describes the advantages of dating someone with a “dad bod” in her post, which overwhelmingly reads like it is from the perspective of a woman who is self-conscious about her weight to the point of obsession. A man with dadbod, she says, “doesn’t intimidate us,” because he makes his girlfriend look better by comparison. “We want to look skinny and the bigger the guy, the smaller we feel and the better we look next to you in a picture,” she writes.

When I first read Pearson’s piece, I didn’t think too much of this. I assumed she was making a joke about insecure girls wanting to sleep with fat dudes because they make them feel better about their own bodies, which I guess would be a thing that some women—albeit incredibly neurotic, self-absorbed women—would do.

But upon closer reading, I realized how wrong my reading of Pearson’s piece was. Dating someone overweight to make you feel better about your own body is not something that some women would do. It’s what a woman with a near-pathological sense of self-loathing and possibly an eating disorder would do.

I have written at length about my own lifelong struggles with disordered eating. But at the risk of ascribing such issues to Pearson or anyone else who felt that one specific point about dadbod was particularly resonant, I don’t think fucking someone because their body makes you feel better about your own is an especially valid reason to sleep with someone. I mean, I don’t think fucking someone for any reason other than that you want to fuck them is particularly awesome, but to do it because you want to feel small and frail and helpless beside them; because you want people to look at you two together and think, “Damn, she looks skinny,” instead of, “Damn, they look like a happy couple,” is not only silly, it’s borderline pathological.

To me, that’s the biggest problem with dadbod. It’s not like preferring blondes to brunettes, or Casey Novak to Alex Cabot. It’s not an inherent, unfixed preference that makes you lift your head and take notice whenever a dude who looks like Vince Vaughn circa Fred Claus walks into the bar. It is, at least in part, a manifestation of the incredibly screwed-up relationship women have with men, sex, and their own bodies.

So before we start applauding sorority girls for spawning this meme, or spinning off of the immense popularity of dadbod by coming up with other ridiculous taxonomies for men’s bodies, it’s best if we investigate the reasons why we love dadbod so much first.