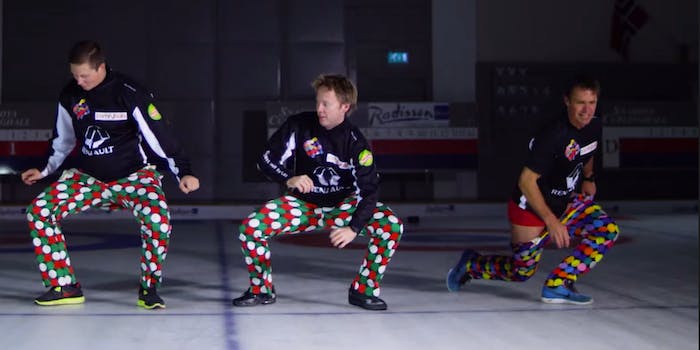 No one makes shimmying into pants sexier than these gents.

In the arena of winter sports, it’s hard to find a group more mercilessly ridiculed than curlers. Even ice dancing gets a better rap than these janitors of the ice, who spend their day furiously sweeping the rink with their brooms.

But if anything, the ceaseless taunting and jokes have only hardened the curlers, making them stronger than their precious curling stone both on the ice and off.

Case in point: the Norwegian curling team. The 2014 World Curling Champions were challenged by an underwear company to don their famously loud pants on the ice, all without the use of their hands. Not only did these bastions of athleticism manage to dress themselves, but they did it all with grace, style, and some moves I’d like to copy on the dance floor.

Just remember the poise of these men next time you go to make a curling joke. After all, you don’t see them laughing when you slip and fall on your ass at the ice skating rink.