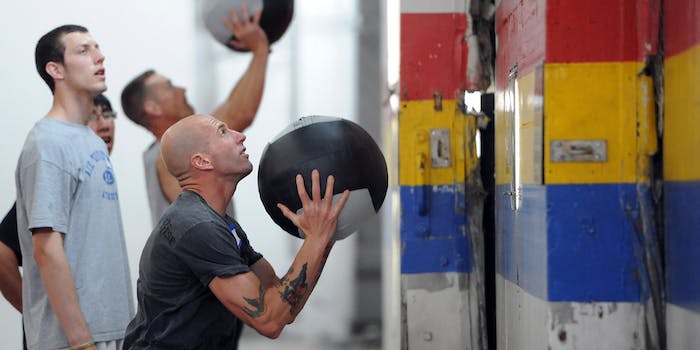 Photo via Joint Base Elmendorf-Richardson/Flickr

Is it time to admit that CrossFit is too dangerous?

CrossFit is still all the rage in sports training. But maybe it shouldn't be.

CrossFit. Pretty sure I’m never doing that. I don’t need what it gives. I don’t need to fork out double my monthly beer allowance to truck out to a dilapidated warehouse in some remote part of the city to have a “coach” who trained for two days yell at me in a room full of Kool-Aid drinkers encouraging reps to infinity in order to exercise to puking. I am perfectly capable of being my own cheerleader to achieve a sweat-out-my-spleen workout.

Years ago, I had a lower-back blowout, collapsing to the floor and emitting a sound akin to a raccoon, a pit bull and a teenager with Tourette’s all trapped inside a metal garbage can. I’m 46, and I am breakable. Sure, I recently qualified for the Boston Marathon and have benched almost double my body weight. I can also ski off cliffs and sea kayak through four-foot swells, but I’m not putting my lumbar discs at risk if I can help it. CrossFit fans, let the burn flow through you.

Now that I have your attention, I’ll tone it down a bit and lend some perspective. There are arguments for and against CrossFit. It’s spreading like a cold in a kindergarten classroom; with over 10,000 affiliate gyms now open, plus the highly visible Reebok branding, it is garnering much more attention. The media is losing its collective mind over CrossFit, acting like it’s trans fat, global warming, and the high school bully all wrapped up into one shoulder-destroying, lumbar-bursting, kidney-evaporating package. If you look up CrossFit on Wikipedia, it even has a section entitled “Criticism.”

In general, the criticisms fall into three major categories: the cultish nature of CrossFit, its efficacy—and injury rates. Allow me to explain.

1) CrossFit as a cult

Here is a Fight Club paraphrasing meme: “The first rule of CrossFit is: Always talk about CrossFit.” Who cares? I know some people who really dig CrossFit, and good for them. Far better to be passionate about your chosen activity than to grow roots while battling sexy ogres in World of Warcraft. I write a lot about my love of running, cycling, lifting, sea kayaking, skiing, and Rush—seriously, CrossFit adherents are no more cult-like than Rush fans. If drinking the Kool-Aid gets people exercising, that’s not a bad thing.

CrossFit has been criticized for not making people excellent at anything, but instead mediocre, or perhaps even good, at a lot of things. Apparently this qualifies the winner of the CrossFit Games to call themselves the fittest man/woman on earth. Whatever.

I wanted to get some help here, so I got in touch with Dr. Jonathan Fass, an expert in physical therapy and performance enhancement. “CrossFit does appear to be able to improve markers of health and fitness capacity,” Fass told me. He also said it probably won’t make someone better at football, power lifting, tennis, or running a faster marathon. “In fairness, there are a few CrossFit programs that have shown up from time to time, such as CrossFit for Football or Crossfit for Distance Runners,” Fass said. But he argues that a dedicated, activity-specific training program would be a better choice. I agree. When I wanted to qualify for Boston, I went to a running coach. Not CrossFit.

Overall, Dr. Fass says: “If you want to just be faster, stronger and more physically capable of doing a lot of varied things, which in my opinion is not a bad goal at all, CrossFit may be able to help you in that regard.”

Fass spoke of research showing “troubling injury trends” in CrossFit that are nonetheless not definitive. The reality is that the data just isn’t there to support (or refute) it, because CrossFit is a loose community of affiliate gyms that have no mandated program for injury tracking. What’s more, injuries in such activities often don’t present during the exercise. They are repetitive strains that are the death by a thousand cuts. One day, you find your back is screwed, even though there was no explosive blowout.

Speaking of lower-back pain, Dr. Stu McGill is the man when it comes to spine biomechanics (I interviewed him on the subject before). In this article, Dr. McGill was watching a hip-back extension video on the CrossFit website and said, “That’s a great disc herniator.” In the same article, he said that there are many other sports that can create similar risks, however, and that it often comes down to proper instruction. For me, already having back issues, the repetitive nature of some of the movements pose too great a risk.

Fass reported that one study said CrossFit’s injury rate seemed to be comparable to powerlifting and Olympic lifting, and that seems reasonable. Running is also a sport filled with injury, as are basketball, football, hockey, rugby, etc. Every time you get off the couch, you can get an owie.

My main criticism of CrossFit in regards to injury is that it takes an activity—resistance training—that has an excellent safety record, and sometimes seems to relish making it unsafe. As an example, CrossFit’s founder, Greg Glassman, was quoted in the New York Times: “It can kill you…If you find the notion of falling off the rings and breaking your neck so foreign to you, then we don’t want you in our ranks.” Glassman also once wrote: “We have a therapy for injuries at CrossFit called STFU.”

4) Glassman as a businessman

The guy knows how to make a buck. It costs a $1,000 to get a weekend certification, and then there are the annual affiliate fees to call your gym a CrossFit gym, plus the deal with Reebok sends lots of royalties his way, and he gets registration fees for the CrossFit Games as well. I wouldn’t mind having his bank account.

But I wouldn’t want his physique. Sometimes I wonder if he’s just trolling us all, having come up with CrossFit and then never setting foot in a gym again.

5) Is CrossFit good or bad?

It can be either, and it boils down to caveat emptor.

As a buyer, you need to beware of the extreme jack wagons with minimal understanding of proper exercise technique who will push you until you break. The trend seems that CrossFit may have begun as a go-hard-or-go-home mentality, but work out ‘til you puke and disgusting “Uncle Rhabdo” T-shirts (Google image search that) are starting to go by the wayside. In other words, at least some CrossFit entrepreneurs are listening to the criticism and ensuring they put safety first, because injured clients don’t come back to keep paying those monthly dues. They don’t buy into Glassman’s STFU mentality regarding injuries, and they have a lot of other exercise education and experience to go with the CrossFit certification.

If you just desire to be fitter, are into exercising hard, and want to join an exercise community of like-minded people, you can find a good CrossFit gym if you do your due diligence. It’s important to understand, however, that this is a fairly extreme activity, and it will come with risks no matter how careful you are.

This post originally appeared on AskMen and has been reprinted with permission.