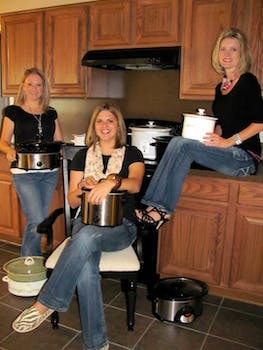 Three moms, two weeks, one million Facebook fans. But, are the Crock Pot Girls for real?

The Crock Pot Girls could be living proof that anyone can make it on the Internet. Three blonde Texas moms united by a shared interest in home cooking set up a Facebook page on August 19. Less than two weeks later, they have over 1,000,000 fans.

It’s the sort of Internet fairytale that people love to hear. Some parent bloggers are applauding the women for not resorting to any sordid techniques to attract fans.

“The remarkable thing about this is that these girls didn’t seem to do anything special,” wrote Eric of Fashion Dad. “There are no fancy bells and whistles to their Facebook page: no interactive tabs, no ‘Like’ us for a chance to win an iPad – just a couple of pictures of three ‘soccer mom looking’ women holding their crock pots.”

Unfortunately for their supporters, the fairytale of the Crock Pot Girls might be too good to be true. “Bells and whistles” only scratches the surface of how they may have risen to success.

Some skeptics suspect Shelby is using Facebook bots, or small programs that perform reptitive tasks while appearing to be human users. That could explain the Crock Pot Girls’ continually rising popularity rate, even during times when many Facebook users are asleep.

Shelby may have also used illegal techniques, like bots, to grow the Crock Pot Girls’ audience, writes Scribbal. He may have sent bots crawling Facebook to make users’ friends appear to like the page when they actually did not.

“The first clue that something is amiss is that I had my stream say that several of my friends ‘liked’ it, and I happened to be Skype chatting with several of them and they had no idea what I was talking about,” the page founder wrote.

Google searchers looking to investigate the story for themselves will also have a difficult time. Blog posts lauding the Crock Pot Girls fill the first three results pages. Afterward come the listings for more and more pages accusing them of being a scam.

When Andi Brofft of Udandi wrote about the Crock Pot Girls’ surprising popularity, an anonymous commenter named Michelle came to their defense:

“Chase is one of the girls’ brother in law. I am a new friend to the girls, having offered some basic marketing and publicity advice. We’ve talked for several hours on the phone, and they are just as shocked as the rest of the world is about their number of ‘Likes’,” she said.

According to their Facebook page, the Crock Pot Girls are just as incredulous as everyone else.

“We are so excited to see how much CPGs has grown in only 10 days!” they wrote.