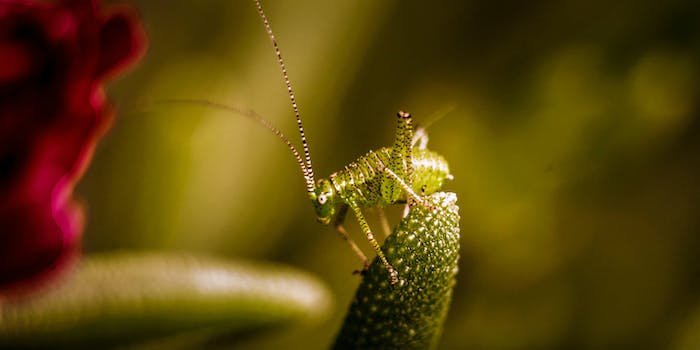 This man made his family’s home a cricket-infested nightmare

We are so, so sorry, Christopher's wife.

Washington Post data reporter Christopher Ingraham certainly has a good story to tell the internet, although lately he’s been crunching more bugs than numbers. Ingraham’s family apparently adopted a bearded dragon lizard for Christmas, and Ingraham made the very unique purchase of a cricket box (that is, a box of crickets for a pet lizard or similar creature). But the 250 crickets he ordered from an online insect supply store didn’t stay boxed up for long.

Folks with entomophobia, check yourselves at the door because it’s about to get creepy and crawly.

Ingraham and his family live in rural Minnesota so his closest cricket provider is about an hour away, in another state.

So, a shipment of crickets for the lizard arrived via FedEx today. It was my first time ordering bulk crickets off the internet, and I naively assumed that they would be in like, a bag or some other contraption to facilitate easy transfer to another container. They were not.

It seems like Ingraham’s first mistake would be assuming that some poor FedEx warehouse worker would want anything to do with crickets—or the kind of person that orders crickets online.

They were in a cardboard box. And I cut the tape and opened the box and SURPRISE! Crickets everywhere. It was the middle of the workday and I didn't have time to deal with cricket logistics, so I put the tape back on the box.

Like a lot of journalists, Ingraham’s a bit busy. Too busy to keep things well-organized around the house, so of course he shoves the cricket box into the bathroom. That’s where many writers, yours truly included, come up with their greatest ideas.

And then I put the box in the upstairs bathroom, the only semi-contained place in the house where I knew the kids and the cats and the dogs wouldn't be able to get at the box and tear it open and unleash 250 hungry crickets into our warm, semi-humid environment.

Then Ingraham makes his biggest mistake: Keeping his wife in the chirping, cricket-infested dark.

About 20 minutes later I'm back at work on my computer, and I hear my wife in the kitchen: "where are these goddamn crickets coming from." I freely admit I had not kept her fully up-to-date on my cricket purchasing plans.

And at first I was like "okay, maybe one or two got out when I initially opened the box. No biggie." I kept working.

I'm trying to wrap up a story but I keep hearing cricket-related exclamations coming from the kitchen. Eventually I get up to investigate. I say, "So uh the crickets got here toda–"
"I REALIZE THAT," she says. "WHY ARE THEY ALL OVER THE KITCHEN"

I say "That's a good question. Let me check something." I walk over to the bathroom. I open the door. There are crickets. Everywhere.

Ingraham then did what any man would do—retreat to indoor plumbing—and sound like a teenager caught with his dad’s Maxim magazine in the process.

For some reason my first instinct is to flush the toilet, as if that will do anything to solve the problem of crickets in all the other places that were not the toilet. I shut the door. "Uh, don't come in here!" I try to sound cheerful.

Apparently I had not sealed the box shut as well as I should have. I ended up rushing out to the shed, in the 18" of snow and below zero temperatures, to pick up a spare aquarium we had. I spent about 45 minutes collecting crickets from the bathroom.

Of course by this point many had migrated elsewhere. They were in the closet. In the shoes. Making their way downstairs to the playroom. The cats were having what I can only imagine was the greatest day of their lives.

Finally, Ingraham managed to sum it all up with the year’s greatest analogy, coming in hot just before the new year.

I tried to collect all of them. It was like the world's shittiest game of Pokemon. But here we are, roughly 10 hours after the initial catastrophe, and stray crickets are still turning up in odd places.

With one last heave of the tweet button, Ingraham bids his farewell to the mortal plane, deeply sure his wife is going to murder him in his sleep.

I make this information public because if I do not send any tweets tomorrow, it is because my wife murdered me after finding a cricket in our bed in the middle of the night.

And that's the news from Red Lake Falls.

Ingraham updated Twitter on Saturday, saying that he made it out alive and that he had turned the cricket saga into a story of his own.

I'm pleased to report that I'm still alive, and that my marriage is still intact! You all had so much fun with this that my editor made me turn it into a story, which I present to you here, as a sort of director's cut of this thread. https://t.co/oXuG9Tj4yy