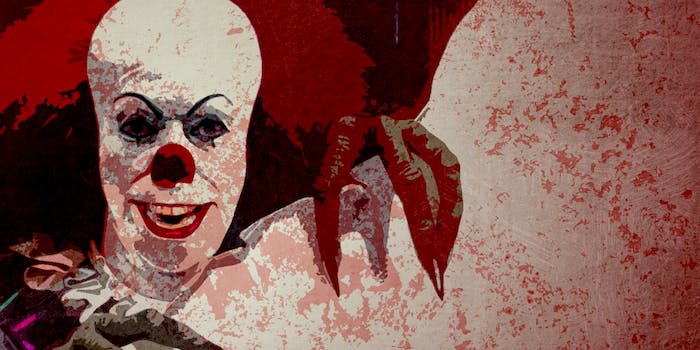 ‘It’ remake casts a hot guy to play Pennywise

Bill Skarsgard doesn't seem like he could kill a child. Just saying.

Hollywood has made many a casting flop in its time, but choosing a hot guy to play Pennywise the clown is by far one of the worst crimes in the eyes of King’s long-faithful fanbase.

Pennywise hails from Stephen King’s brilliant 1986 horror novel It. The story yielded one of the most bone-chilling villains in King’s lexicon, a leering beast in white face paint that ate children’s souls along with their bodies.

While the 1990 miniseries based on the novel barely scraped the surface of the story’s depth, it did a good job on one thing: Casting Tim Curry as Pennywise, who managed to retain the dimension of a character that could easily become a caricature in lesser hands.

The film remake casts Swedish actor Bill Skarsgard (Hemlock Grove) in the role, and while there’s nothing wrong with his acting skills, his model looks are a perfect example of Hollywood’s insistence on crushing a character’s substance by putting looks above everything else.

While Pennywise is never described as an ugly character by King—in fact, the specific features of its face are never described in detail at all—the character requires a certain level of shapeshifting from an actor in order to nail it. Curry was a rarity in this, and had just the kind of face that can go from charming to terrifying in the space of a millisecond.

Pennywise is not just a boogeyman, but the boogeyman: The thing that looms at the back of nightmares just to savor a whiff of your fear. Casting a traditionally good-looking actor goes against the character’s essence so completely that one has to feel somewhat sad for anyone who thinks Pennywise is as simple as a scary clown.

Of course, whether Skarsgard will even have a chance to perform in the role is a different story. It has been a notoriously difficult adaption to bring to life. Warner Bros. originally bought the rights in 2008, but later passed it to New Line Cinema to work on. Cary Fukanaga (True Detective) was slated to direct but has since walked off the project, and has been replaced with Argentinian director Andres Muschietti (Mama).

In a 2015 interview with Variety, Fukanaga said he left the project because the studio didn’t like his focus on strong characters, but rather wanted more archetypes and scares.

“The main difference was making Pennywise more than just the clown,” Fukanaga said. “After 30 years of villains that could read the emotional minds of characters and scare them, trying to find really sadistic and intelligent ways he scares children, and also the children had real lives prior to being scared. And all that character work takes time. It’s a slow build, but it’s worth it, especially by the second film. But definitely even in the first film, it pays off.”

Sadly, that vision is no longer a part of the project, and with Skarsgard’s casting, it seems New Line is wandering further from the heart of King’s story. Word is that it plans to split the project into two films, one that tells the story from the point of view of the children in the novel and the second from the perspective of the adults. That’s about the right length of time needed to delve into the story, but like Fukanaga said, Pennywise is more than just a clown, and It is much more than just jump scares. We can only hope to see New Line figure that out before the movie hits theaters in 2017.