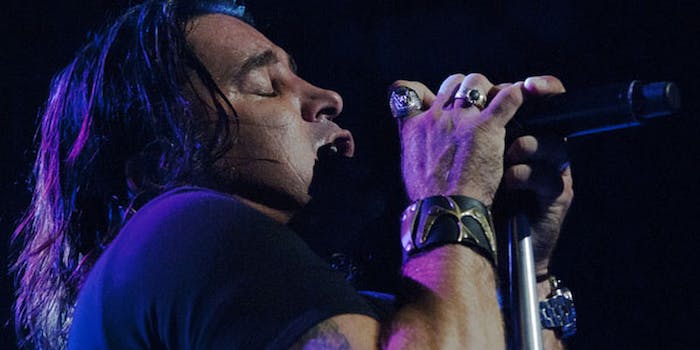 Creed singer writes something worse than “My Own Prison”

Scott Stapp recently had some thoughts about, well, everything. So many thoughts that Twitter’s 140 characters weren’t going to cut it.

Creed frontman Scott Stapp recently had some thoughts about, well, everything. So many thoughts that Twitter’s 140 characters weren’t going to cut it. Rather than a torrent of posts from @scottstapp, we got an open letter to the U.S. of A. on TwitLonger.

And you thought his music was bad.

“Woke up to see more headlines about the Trayvon Martin case,” Stapp wrote. “Now it has become a ‘Civil Rights’ catalyst. I guess ‘Not guilty’ doesn’t mean anything in America anymore.”

Respect for the judicial system and rule of law, we get that. Probably didn’t need to put scare quotes around civil rights, but OK. It’s what comes next that goes a little wonky:

It seems very convenient for President Obama to help perpetuate this “National distraction.” Yes, the civil rights of ALL Americans is [sic] vital to our democracy, but not even an issue in the Trayvon Martin case. I don’t feel it’s a stretch to say that President Obama and others in the White House are perpetuating this story to distract Americans from what is really going on in Washington DC.

Hoo boy. Yes, everyone’s talking about the Zimmerman verdict because Obama is, and not the other way around. Bulletproof reasoning there. Also, the right to life is not a civil one! Truly fascinating.

I won’t spoil the pleasure of reading the whole diatribe, but let’s just say that he connects the dots between this particular “smokescreen” and Obama’s use of the IRS as an attack dog, the implementation of health-care law, unemployment, Edward Snowden, and somebody named “Treyvon” Martin, weaving a web of power and money so compelling I dare you to deny it.

All that conspiratorial mumbo-jumbo is just a lead-in, of course, for much more important news:

Yes, civil rights for all is in the top 10, don’t get me wrong, but it should not distract us from socialism and governmental abuse of power which is the reality of the Obama administration and DC today. We have to WAKE UP~ Love you all. In the studio wrapping up my new album. Can’t wait to share it w/you. Stay tuned~Stapp

A new Creed album? What jury wouldn’t convict him for that.