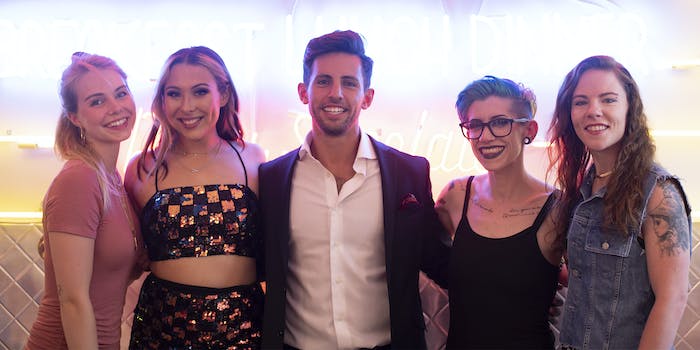 Organizer Zo Asmail gives his advice to creators looking to raise money for their favorite causes.

In June, eight content creators on TikTok participated in an online event that raised $165,000 for The Trevor Project, the world’s largest nonprofit organization focused on suicide prevention for LGBTQ+ youth. During the live event, called “The Tokeler,” creators competed in challenges and the “Tokelors,” a lesbian couple and lifestyle content creators Hailee and Kendra, eliminated them one-by-one until a winner was selected. Throughout the one-hour, Bachelor-style event, viewers were encouraged to follow a link to donate to The Trevor Project.

We were able to sit down with Zo Asmail, the organizer who selected the group of creators and pulled off The Tokelor project in just two months. Asmail, who is also the founder of technology and creator consulting firm Minionz, spoke with us about why he started the Tokelor campaign and how he used TikTok’s Creator Marketplace to choose creators.

When Minionz was started, it was mostly focused on technology, data science marketing, and corporate work. But Asmail said he recently became very interested in the creator space. Specifically, he wanted to help creators with marketing, building brands, and creating loyalty programs.

However, pivoting to the creator space was not without its challenges.

“Creators are an interesting group to kind of sell to. You can’t really go up to them and run a sales process in the same way you would a more corporate client. So, we wanted to make a bit of a splash in the creator space,” he said.

Asmail figured a nonprofit campaign, with a unique event at its center, would be a great way to get a bunch of creators together, raise money for a good cause, and have fun in the process. Plus, The Trevor Project is an organization that’s close to his heart.

“I’ve had a few friends that wouldn’t be here today if it wasn’t for The Trevor Project. In college, they reached out to The Trevor Project and got help. They were actually able to get the support that they needed to and make it to the next day. I’m very grateful that they are still here,” he said.

Asmail said he prioritized finding creators who had genuine connections to the organization and who would personally donate to the cause. He used TikTok’s Creator Marketplace to target LGBTQ+ creators, searching for “pride” and other related keywords. Asmail said he reached out to over 200 creators and evaluated whether or not they would be a good fit.

He said he asked himself many questions about the creators. Is their content appropriate for the cause? How many followers do they have? Can they carry a conversation? Do they show up on time? Would this just be another paycheck for them? Have they done too many brand deals?

Asmail said the creators who took on too many brand deals, or were constantly directing fans to nonprofit causes, had less to offer the campaign than those who were selective with how they used their influence. He warns creators against asking too much of their audience, as it can hurt future prospects for brand deals and partnerships. “I’ve seen that have a negative impact on a creator’s value in the long-run,” Asmail told us.

Asmail also said he’s had to deal with a lot of “bad” managers who don’t have a long-term vision for their clients’ success.

He added that the managers who are historically “good to work with” are the “more mature” ones.

“That doesn’t necessarily mean older,” he clarified. “There’s a lot of managers out there that are in college, and they might do a great job taking care of their clients because they know the world really well.”

Asmail told us he identifies the best managers to work with by asking questions like, “How well do you know the industry? How good are you at sourcing deals for your client? How much are you able to see the bigger picture? How do you actually build a personal brand that can grow and sustain over a long period of time?”

Asmail stressed how important it is for a creator to pick a manager who’s able to identify campaigns that will actually be a good fit for them and their values.

While Asmail went through great lengths to select the right participants for this campaign, one of the campaign’s participants has been accused of bullying and harming LGBTQ+ people in the past. Perez Hilton has been criticized for his early blogging days and has an alleged history of outing gay celebrities.

Hilton has apologized for some of his past behavior. However, just in 2020, Hilton was permanently banned from TikTok for violating community guidelines. The ban was in the wake of inappropriate comments Hilton made in March regarding one of Charli D’Amelio’s videos. In a video addressing the controversy, Hilton denied violating the guidelines of harassment and bullying.

A TikTok spokesperson told the New York Times in 2020 that anyone who violates its policies multiple times will be booted from the platform. “We are deeply committed to maintaining a welcoming and supportive community environment. Our Community Guidelines apply to everyone and everything shared on TikTok, and we remove accounts that repeatedly violate our policies,” it said at the time.

Asmail did not wish to comment on the controversy surrounding Hilton, only saying that “He’s awesome. We loved having him as a part of the show. He was super motivated about The Trevor Project; that’s all that really mattered to me.”

Perez Hilton’s representatives did not respond to the Daily Dot’s request for comment.