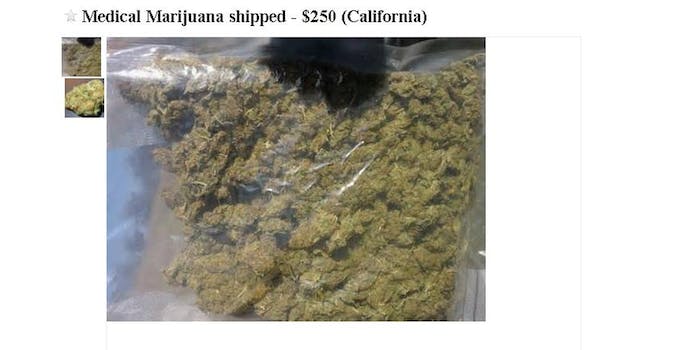 Is this Craigslist weed dealer the DEA, a scammer, or just an idiot?

Is this guy really selling marijuana over the Internet? Or is it an elaborate Craigslist sting by the Drug Enforcement Agency?

Is this guy really selling marijuana over the Internet? Or is it an elaborate Craigslist sting by the Drug Enforcement Agency? Like the original poster on Reddit’s weed community r/trees, I too was in disbelief that a man would advertise a mail order weed business via the Internet. The ad reads “Medical Marijuana Shipped ($250)” and goes on to describe a business that is “smooth, fast, and always discreet,” using search-engine optimization tags like kush, pot, dope, bong, hash, 420, loud, dope, buds, and rolling, all to increase visibility and accessibility on Craigslist.

Just pick a type of weed from the menu and then wait for it arrive via UPS from Northern California. How to get in touch with the dealer? Just text this number.

So I called the DEA media line, and the man who answered said the DEA would never put up a Craiglist ad. “We’re a government agency,” he said brusquely. “Why would we put an ad on Craigslist?”

Then he hung up.

So I texted the number on the ad, asking if it was the DEA.

“Well, that is your call,” the person wrote back. “I have very dank bud.”

I told him I thought it was weird to advertise on Craigslist if he wasn’t the DEA. 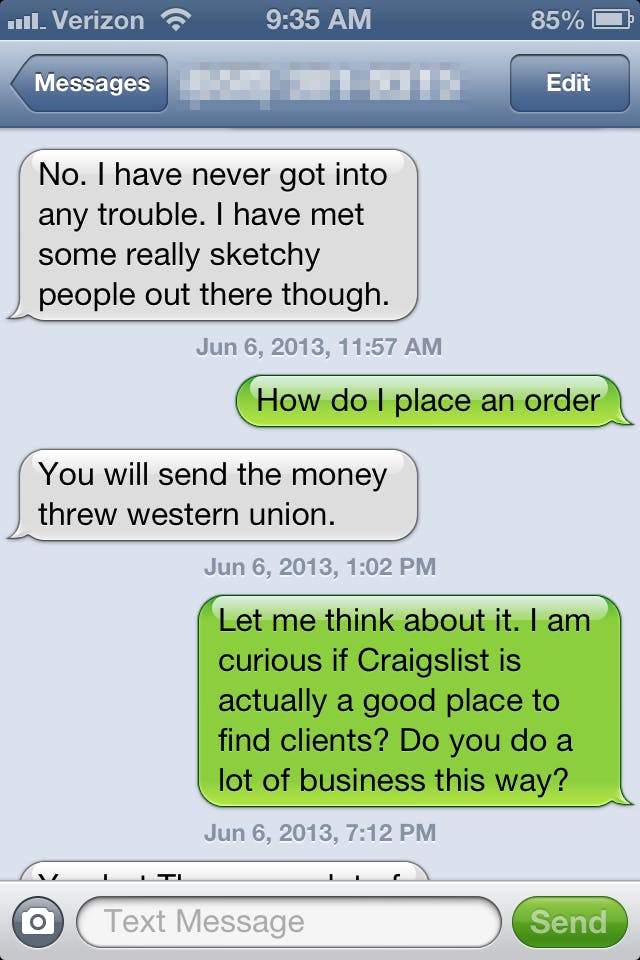 “I understand. It is really sketchy to do this but you just have to trust and believe.”

I asked how to place an order. “You will send the money threw (sic) western union,” he wrote back, possibly using bad spelling to throw me off.

“Have you gotten into trouble doing this?” I wrote.

“No, I have never gotten into trouble. I have met some really sketchy people though.”

“Do you find a lot of business this way?” I asked.

Western Union, for example, is a notorious red flag. Craigslist even warns you, in all caps, “NEVER WIRE FUNDS VIA WESTERN UNION, MONEYGRAM or any other wire service—anyone who asks you to do so is likely a scammer.”

“Yeah, I know it seems sketchy,” he responded, “but you just have to trust and Believe me.”

So, is he the DEA? Is he just planning to take my weed money and send nothing in return? I’m leaning toward the former. Please don’t arrest me.