If you’re trying to sell something or request a favor on Craigslist, it’s best to be honest. For instance, if you’re too drunk to get your own Slurpee from 7-Eleven, just say that you’re too damn drunk to drive.  But if honesty means racism and misogyny, it’s probably best to keep your thoughts to yourself and just post a picture and a short description.

A North Carolina man ignored that guideline and said way too much while trying to sell his riding lawnmower. Disclaimer: If you’re not a full-blooded American, don’t bother trying to buy this all-American contraption. 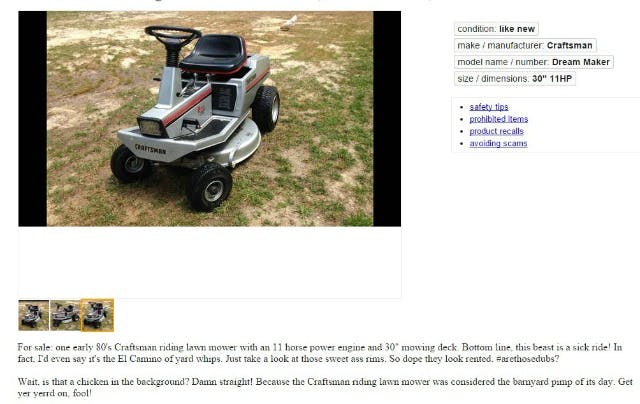 “No texts, please,” the seller writes at the end of a listing that sounds like the script for a commercial featuring banjo music. “I need to hear your voice and know that this family pet is going to a 100% full blooded american. #Merica”

#Merica, indeed. Here’s the rest, in case the listing disappears. 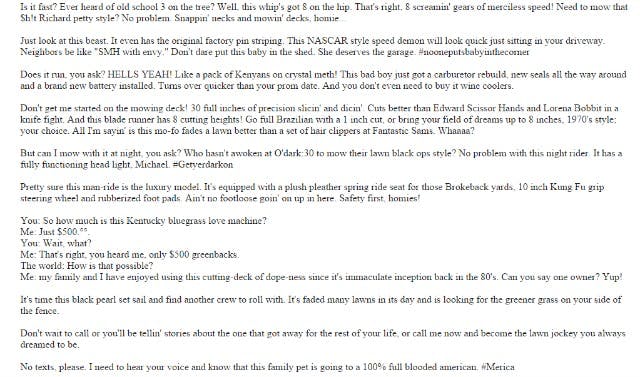 Perhaps the deal isn’t as great as the seller hopes, or maybe people just don’t like his metaphors, because as of Thursday afternoon, this ad has been up for 11 days.