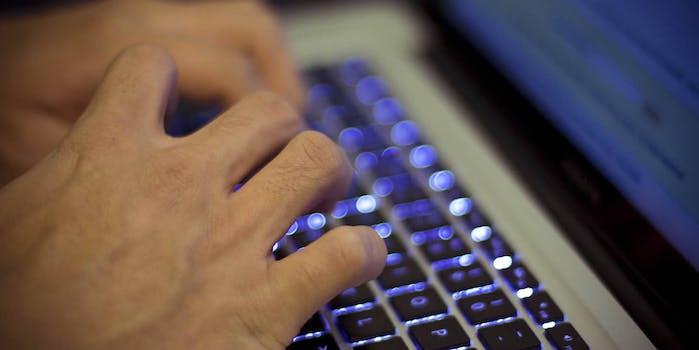 Just in time for cuffing season...

Ah winter, aka cuffing season. As the nights grow long and the temperatures drop, many singles are searching for that special someone. Or at least someone to snuggle up to on cold nights. Some search for love on Tinder, some head to their local bar. But if you’re one Rochester Craigslister, you go straight to the classifieds and post a “Writing Gig.”

A Craigslist ad titled, “Looking For a Young Woman Writing/Life Partner,” explains what one single dad is looking for in a partner. And it sounds like a full-time job. 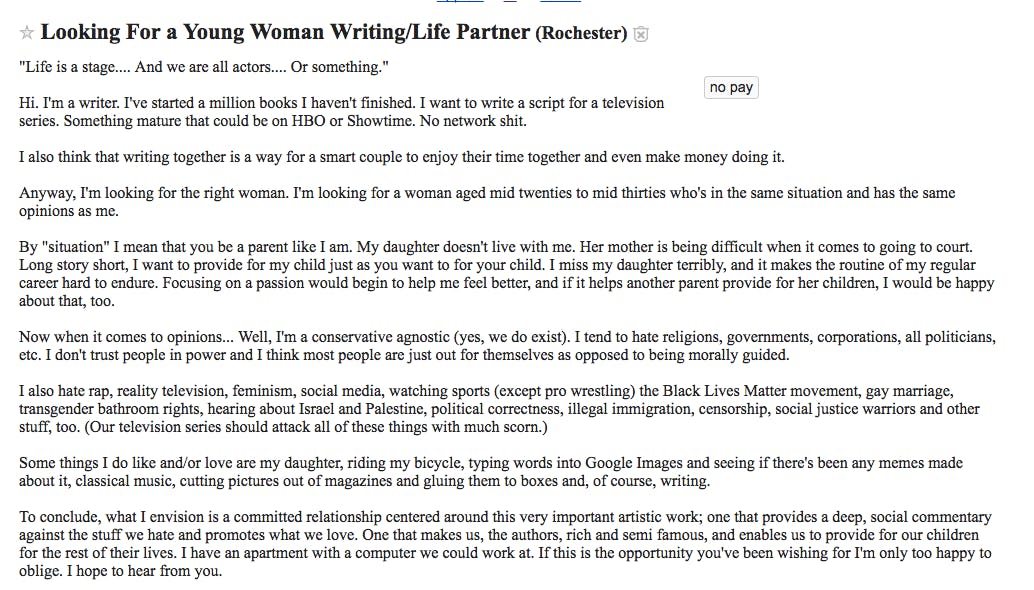 From sharing all of his opinions, to writing a hit show for premium cable, the woman of this guy’s dreams has to have it all.

A true romantic, the man opens his ad with a bit of poetry: “‘Life is a stage…. And we are all actors…. Or something.’”

He goes on to introduce himself, flaws and all: “I’m a writer. I’ve started a million books I haven’t finished.”

A brave detail to lead with when you’re seeking not only a mate but a writing partner.

In spite of never finishing what he starts, the man behind the ad has high hopes: “I want to write a script for a television series. Something mature that could be on HBO or Showtime. No network shit.”

He then switches gears to say exactly who he’s looking for.

By “situation” I mean that you be a parent like I am. My daughter doesn’t live with me. Her mother is being difficult when it comes to going to court. Long story short, I want to provide for my child just as you want to for your child. I miss my daughter terribly, and it makes the routine of my regular career hard to endure. Focusing on a passion would begin to help me feel better, and if it helps another parent provide for her children, I would be happy about that, too.

We almost feel bad for this guy. That bit about his daughter is pretty bleak.

But then we remember he’s seeking a pre-programmed robot who has the same opinions as him. And then he goes on to describe the long list of opinions his potential mate must agree with to qualify:

Well, I’m a conservative agnostic (yes, we do exist). I tend to hate religions, governments, corporations, all politicians, etc. I don’t trust people in power and I think most people are just out for themselves as opposed to being morally guided.

That doesn’t sound so bad. Oh, oops, there’s actually a whole other list of things he hates.

Oh cool, he hates everyone and everything!

But don’t worry, he has a heart. There’s also a list of things he enjoys:

Some things I do like and/or love are my daughter, riding my bicycle, typing words into Google Images and seeing if there’s been any memes made about it, classical music, cutting pictures out of magazines and gluing them to boxes and, of course, writing.

This is a man after all of our hearts. Too bad he’s oozing with so much hate. And doesn’t know the word for “collage.”

He closes the ad by reiterating what he seeks in a mate.

To conclude, what I envision is a committed relationship centered around this very important artistic work; one that provides a deep, social commentary against the stuff we hate and promotes what we love. One that makes us, the authors, rich and semi famous, and enables us to provide for our children for the rest of their lives. I have an apartment with a computer we could work at. If this is the opportunity you’ve been wishing for I’m only too happy to oblige. I hope to hear from you.

You heard him ladies, “an apartment with a computer.” Get in line.

The Daily Dot reached out to the creator of the ad for comment, but we have not heard from him as of this writing. We assume his silence can only be due to the high volume of responses he’s received.