Sophie the corgi is taking over Snapchat

She's a dog of many talents.

Sophie is a corgi of many different talents. She’s cooked up the finest of meals as a talented chef. As a karate master, she’s duked it out with the deadliest feline ninjas. The pooch has even protected the universe as an Asgardian thunder goddess.

All in the day’s work as a Snapchat-famous corgi that transforms into whatever her owner Mike Metzler whips up. 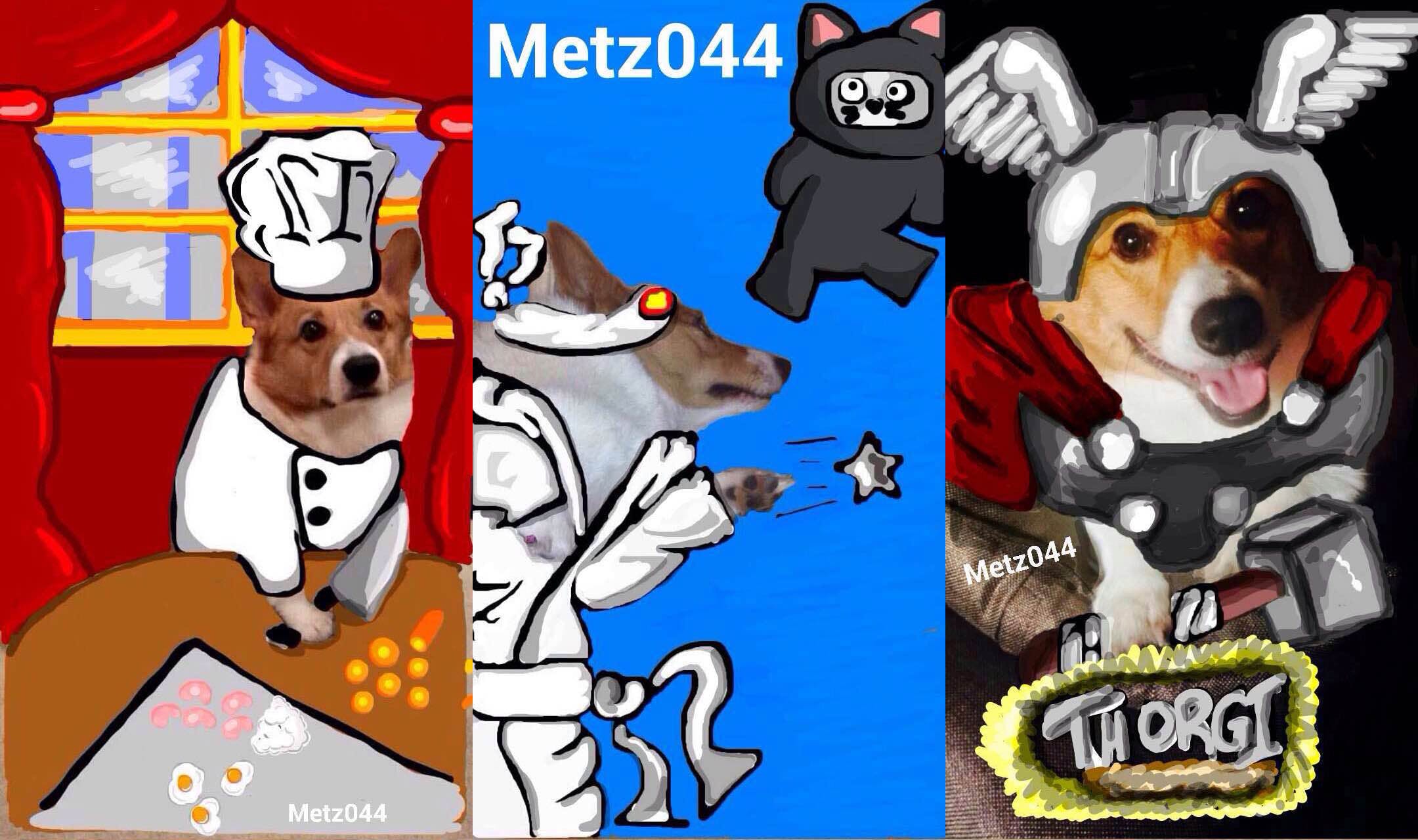 “What do people like to see on the Internet? It’s animals and especially corgis for whatever reason. They have a strong presence on the Internet,” Metzler told The Daily Dot. “I started Snapchatting my dog and putting captions, captions turned into drawings.”

On Snapchat as Metz044, the account has almost 10,000 friends and a Snapchat score pushing 35,000. Metzler first got an influx of adds on the photo-sharing app after some exposure on Tumblr. A photoset of Metzler’s masterpieces racked up more than 6,000 notes. The snap wizard got around 2,000 followers on the app within a couple of days of the initial Tumblr post.

The Business Development Director at Softway Solutions in Houston, Metzler’s background is in marketing and business. His company specializes in interactive marketing and technology solutions, using Vine, Instagram, and Snapchat as content-marketing services. As part of his job, he launched UNICEF’s Snapchat campaign that raised awareness for the thousands of children that have fled Boko Haram’s violence.

Influential Snapchat artist Mike Metzler (Snapchat name Metz044) recreated a drawing by Peter, a child #refugee from northeast #Nigeria now living in #Chad. Peter was separated from his family during the attack in #Baga, and misses the landscape and the animals at home. The environment is very different in Chad, more arid and lacking vegetation. “After reading Peter’s story and looking at his image I realized how much I take the landscape for granted and how much I would miss the animals, trees and environment if I was forced to move to a completely different environment,” Metzler says. The drawing was recreated in a positive children’s cartoon stylized fashion, with an emphasis on green landscapes and colorful animals as described in Peter’s story and picture. #BringBackOurChildhood #BringBackOurGirls

Metzler might have professional experience with spearheading successful Snapchat initiatives, but his actual drawings and illustrations have improved as he and Sophie have gotten more attention.

“You spend two hours on anything and after a while it starts to get good,” he says. “I don’t really know where the snaps are going to go. I start drawing the outline of an outfit and I’m like ‘Oh this might be a chef or a western outfit’ and it goes there. It’s a lot less planned than it looks.”

For inspiration, he thinks back to what some of his favorite cartoons were growing up and what he’d like if i was a 12- or 13-year-old kid. Adventure Time, Rick and Morty, and Futurama have all given Metzler a little vision when it comes to his own creations. 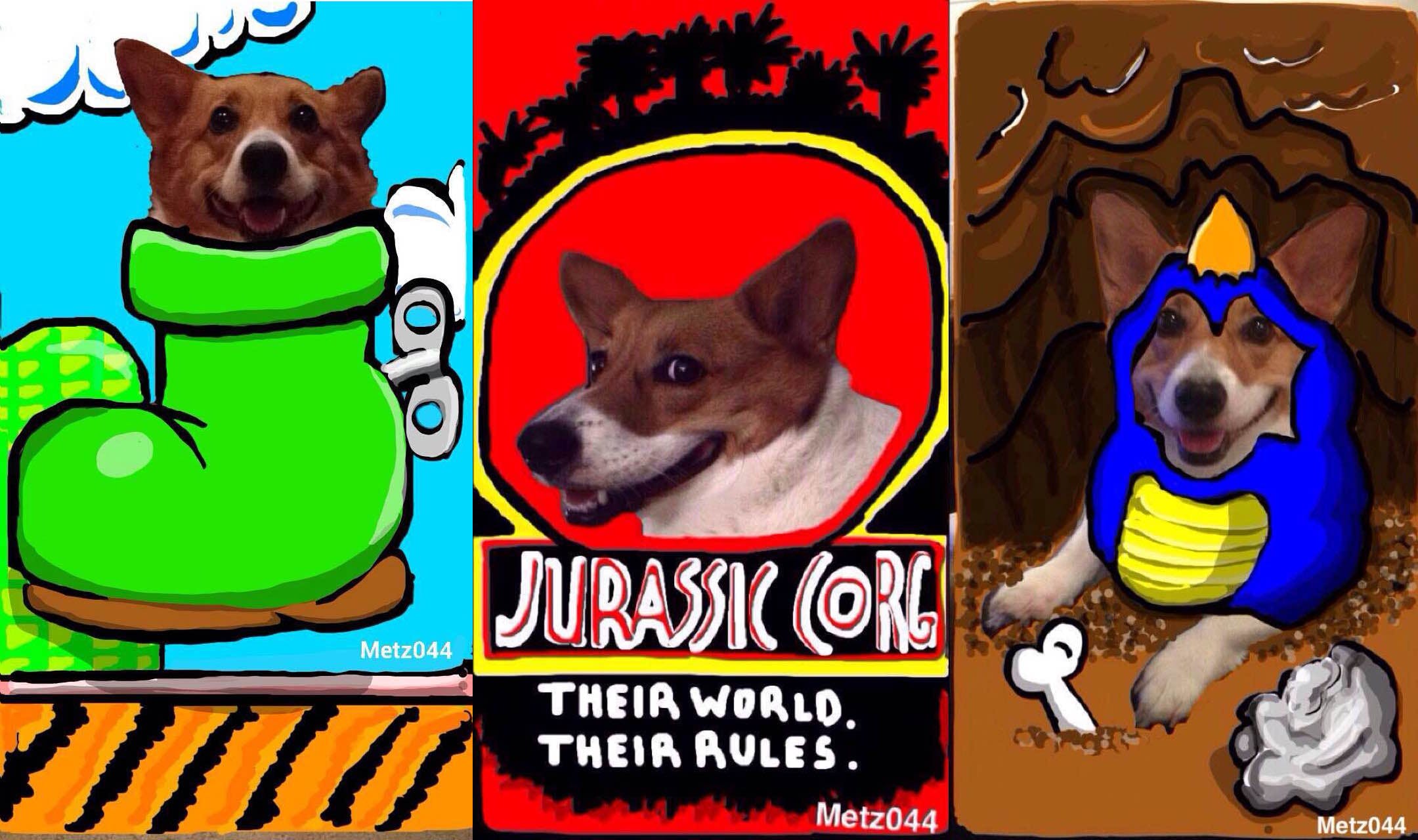 Because of the differences of Snapchat features on iPhones and Android phones, Metzler draws on whatever is going to be best for the drawing. If he needs a lot of different colors, an iPhone or iPad is best. Meanwhile, Androids are useful for drawing something with a lot of shading or transparent colors, such as using a transparent white color to add a glossy effect to a space helmet.

As for getting those details in, a stylus is key. 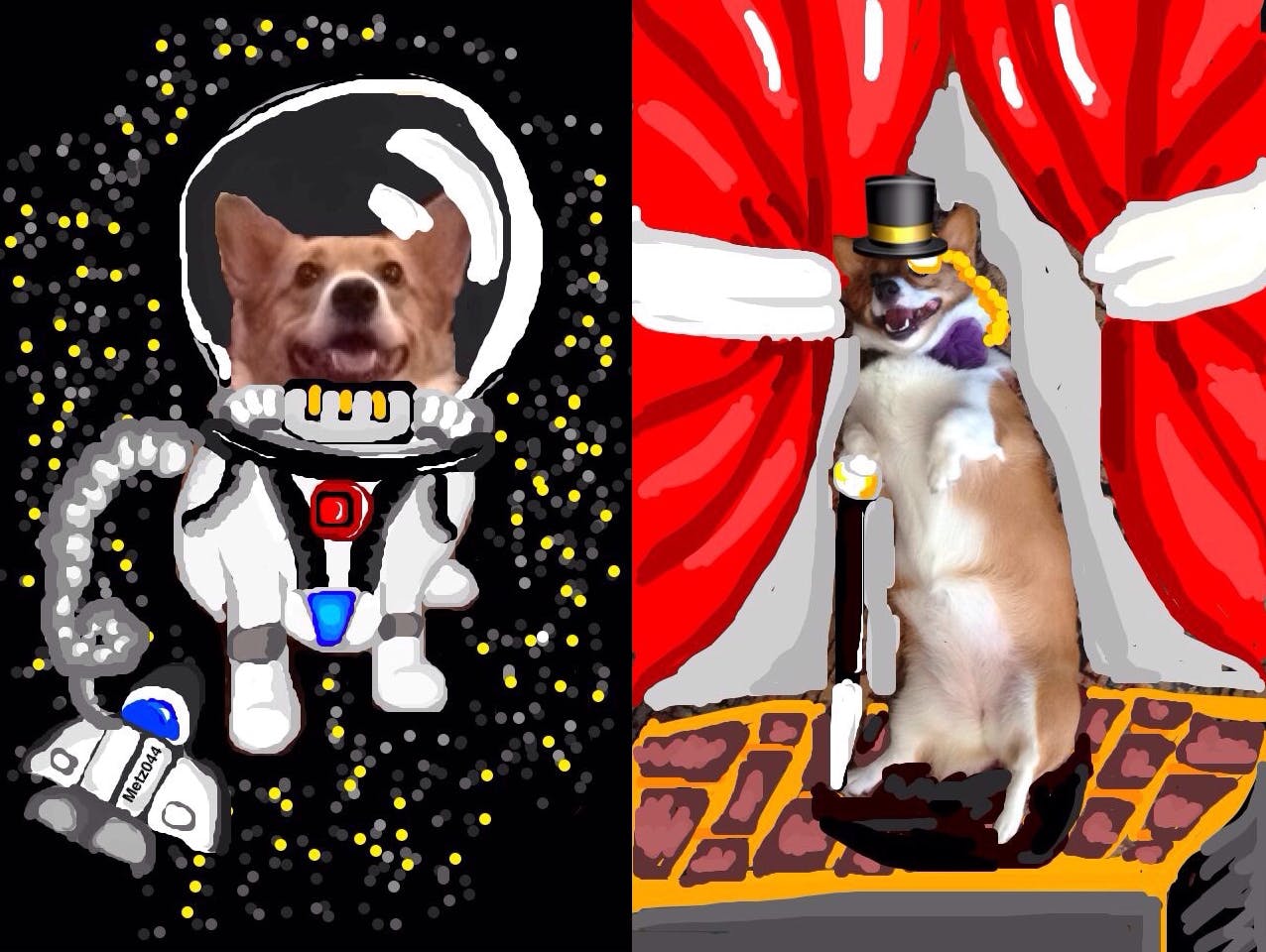 Metzler regularly interacts with fellow Snapchatters, quick to point out all the positivity that he’s experienced in the community. He often talks with other Snapchat artists about the app’s updates and collaborates together for art projects that provide exposure for every party involved, along with giving snap shoutouts to the other aficionados that he works with.

“I get requests like, ‘Can you draw my dog?’ along with compliments from people saying it’s cute,” he says. “It’s that one-on-one connection. Most of the time whenever I respond they kind of lose their shit a little bit because they don’t think you’re going to respond to them.” 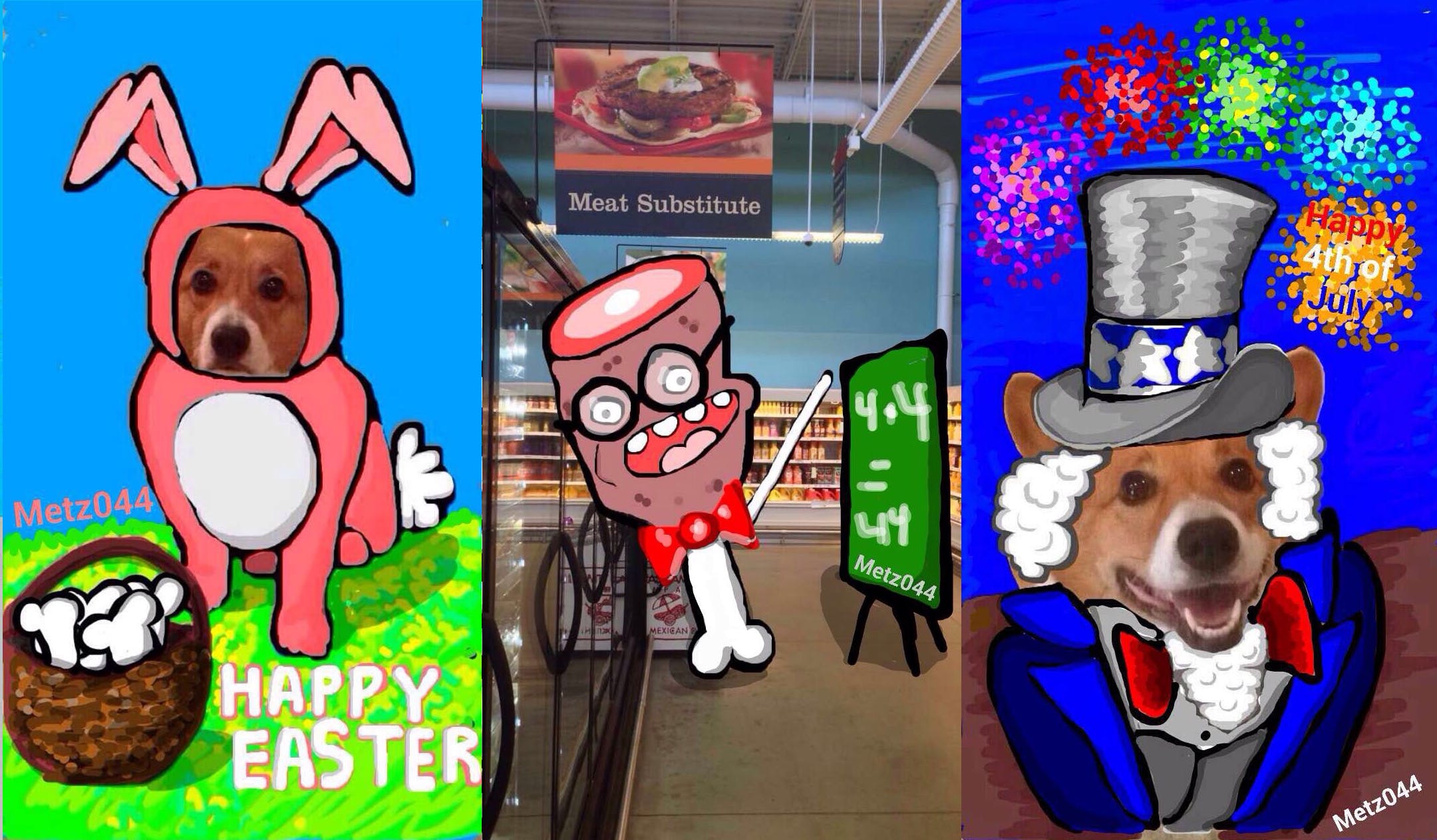 Sophie typically ends up in Metzler’s snaps, but he’s also got some creative gems that are just his standalone amazing doodles. And the corgi has already had some Internet fame before stepping into the Snapchat spotlight. When she was just a little pup, Sophie tore up Reddit with her amazing hiding skills.

“She’s actually been famous,” Metzler laughs. “She’s blissfully unaware of the thousands of Snapchat followers and fans that she’s garnered over the last year.” 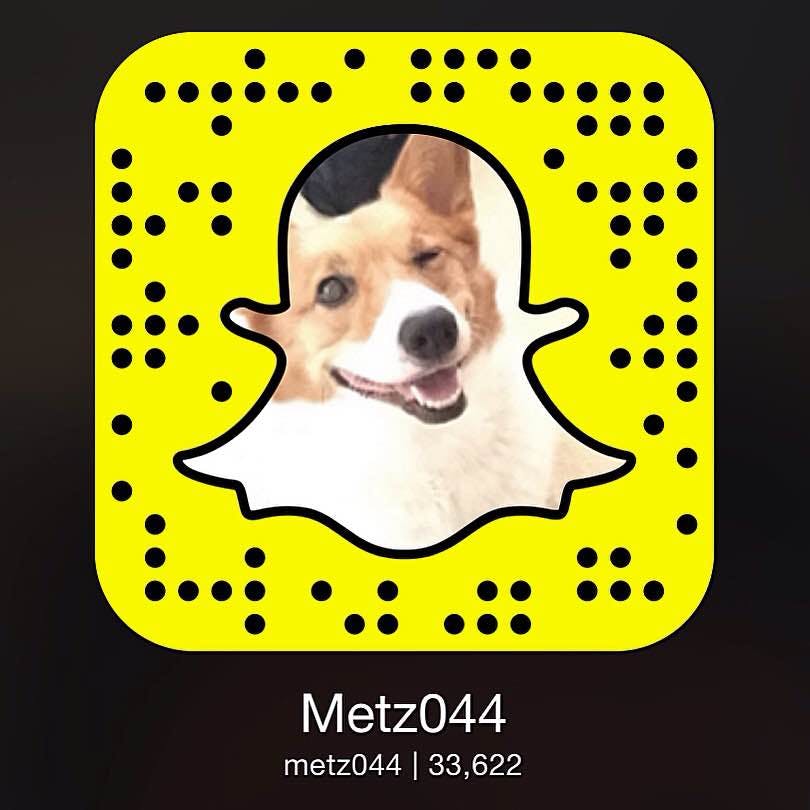