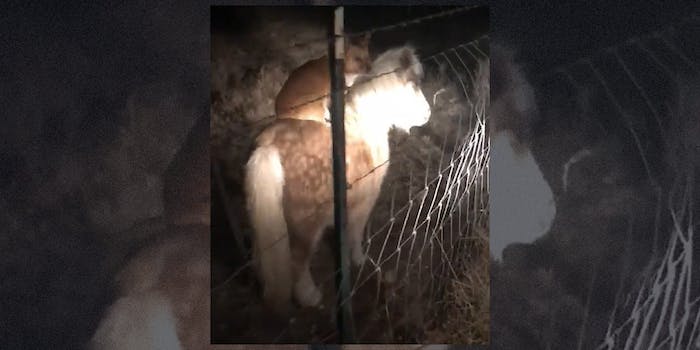 A video captured by a 22-year-old woman in Missouri shows a corgi riding on the back of a pony. Excuse me, a one-eyed pony named Cricket. Callie Schenker says the corgi belongs to her neighbors, and the dog apparently snuck onto her property and befriended Cricket while all the humans weren’t watching.

WATCH: A woman was shocked to discover her neighbor's Corgi was sneaking onto her property at night and… riding her pony? https://t.co/dQfpNAiRLG pic.twitter.com/Da9gnWsJvB

News anchor Katy Andersen tweeted a link to the video on Wednesday, and it quickly spread across the internet. Over the last couple of days, the video was retweeted by more than 50,000 people on Twitter. If you watched the video, you probably have a few questions. How the hell did this corgi climb onto the pony’s back? Did the pony bow down? Did the corgi bounce from the fence to the pony’s back? Can the pony and the corgi communicate with each other?

It’s probably best not to think too much about the logistics of this video. Just enjoy it as a break from the daily soul-crushing news cycle. The internet is certainly enjoying it:

Can't stop laughing at this. How did the Corgi get up there?? https://t.co/BZH9fFu4He

An actual dog-and-pony show is pretty damn entertaining, it turns out. https://t.co/WZGOzQPIc7

— Shutdowns in every state and every city, NOW (@Noahpinion) February 9, 2018

I don't want to oversell it, but this is the single greatest event that's ever happened in America. https://t.co/dCnRY0V5H3

Stop everything. This is the story of the week. https://t.co/E4AxI10lvz

Nothing can stop their love! https://t.co/Mv2wPVryRh

Our world is still worth saving. https://t.co/CxU1gjo8rZ

One person made a request: Set the video to Ginuwine’s 1996 hit song “Pony.”

Someone put some Ginuwine over this video. https://t.co/wntYra4YNf

Ask, and the internet delivers. Here’s the video with “Pony” playing in the background.

fixed the audio for ya pic.twitter.com/br9KErUcMq