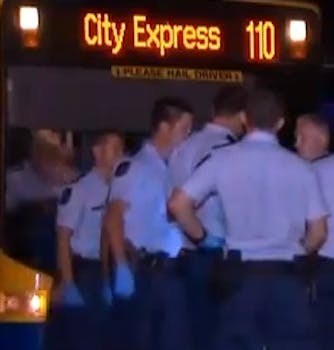 Cops get hit with bricks as Facebook party goes bad

A bash in Brisbane, Australia, got particularly intense when police arrived to shut it down. Revellers pelted officers with bricks and injured two.

The perils of organizing a party on Facebook go beyond more people turning up than you hoped.

A bash in Brisbane, Australia, got particularly intense when police arrived to shut it down. Revellers pelted officers with bricks and injured two, the Brisbane Times reported.

One of the constables had four stitches and needs plastic surgery on a fractured eye socket, while his colleague needed eight stitches.

As many as 250 people showed up to the party in the Acacia Ridge area, and some were as young as 11. Police broke up the festivities, though some of the attendees gathered at a bus stop nearby.

Some of the youngsters boarded a bus when it pulled up, and kicked out the windows while their pals damaged the exterior of the bus. Some officers boarded the bus, and that’s when the two who remained outside were alleged hit with bricks.

‘‘The officers on the bus decided to drag those two officers who had fallen onto the bus and directed the bus driver to shut the doors and drive the bus from the area,’’ Detective Inspector Geoff Acreman said.

Three people have been charged over the incident, according to 7NEWS.

This is just the latest example of a house party getting out of hand after being publicly listed on Facebook. Earlier this month, police shut down a 200-strong party in England, while Dutch officials slammed officers for failing to control a shindig with 4,000 revellers in September.

Meanwhile, another English teen found out the dangers of hosting a Facebook party when her friends, their friends, their distant acquaintances, and that person they hooked up with one time a few years ago all seemingly descended onto her house and caused around $50,000 of damage.