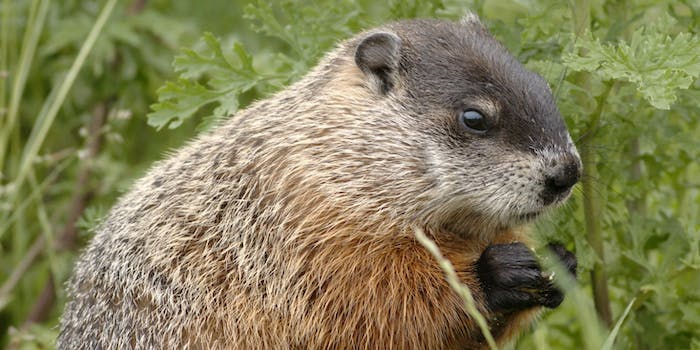 People are not happy with this cop who shot a groundhog

The groundhog was behaving oddly, according to the police.

A cell phone video that started out cute and funny suddenly turned violent and sad when a sheriff’s deputy in Eldersburg, Maryland shot and killed a groundhog that was blocking traffic on Liberty Road in Eldersburg.

The Carroll County Sheriff’s department issued a statement in which they say the animal was acting oddly and might have been sick or injured.

“He [the deputy] realized that it was not responding as expected for an animal that was not being cornered or trapped,” the department said. “Believing the groundhog to be either sick or injured, the deputy then put the animal down for the public’s safety.”

Karen Baker, executive director of the Carroll County Humane Society, agreed that it was “unusual behavior.”

“Under normal circumstances, an animal will take its easiest route of escape when it’s threatened or frightened,” Baker told local news station WBAL “Normally, an animal will run from humans, especially if you’re making yourself large, you’re stomping your feet, you’re loud.”

Baker said the humane society will not be testing the animal for any diseases since it didn’t come in contact with humans or domestic animals.

The reactions on Twitter were overwhelmingly negative, with most people feeling the situation could have been handled far better.

The Carroll County Sheriff Dept should be absolutely ashamed. If this officer was afraid enough of a groundhog to discharge his weapon then he shouldn't be an officer. Groundhogs are notoriously fragile animals. https://t.co/FC84OD7R02

A cop and a groundhog. Remind me, which one is supposed to afraid of its own shadow again?

We have an entire holiday that involves someone safely picking up and moving a groundhog https://t.co/J74dtfWGJ8

At age 9, I found an injured groundhog baking in the sun; I corralled it into an igloo cooler—by myself—and carried it home. Fed it chicory & plantain leaves…it was better in 2weeks. It then lived under my shed. Maybe 9 year old girls would make better cops than adult males…

The department is going to roast him for the rest of his life and he deserves every bit of it https://t.co/3GcOGCl8oL

And naturally, people saw parallels between the deputy’s actions and other instances of police officers using deadly force.

Warning, groundhogs: Carrol County police will shoot you dead if you do not comply with instructions.

Well, groundhogs are brown.
This one had a cell phone & was coming straight at the officer he was afraid for his life
Now if it had been a fluffy little white bunny with an AR-15 he would have talked the obviously disturbed bunny into surrendering then stopped to get lettuce

The cop shot this helpless animal dead but to be fair The groundhog was holding a cellphone. pic.twitter.com/pT1ikbQVT5

The weird part was they found a gun and a baggie of coke on the groundhog pic.twitter.com/gilyCb47pI

The groundhog was a thug, he was high on marijuana and PCP. If he had only complied with the cop he would be alive.

A lot of people also pointed out that the groundhog’s killing was getting more attention than some stories about people of color being shot by police.

On Tuesday, there was another groundhog-related incident in Eldersburg: a woman says a groundhog came after her in a parking lot.