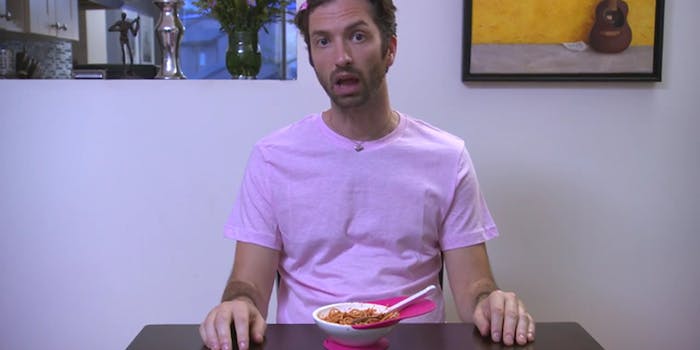 ‘Conversations With My 2-Year-Old’ returns in time for dinner

This new clip tackles a very controversial topic among the toddler community.

The second season of Conversations With My 2-Year-Old debuted today, and it’s grown a lot since season 1. Literally, in fact. Creator Matthew Clarke’s daughter, Coco, is now three, and this new clip tackles a very controversial topic among the toddler community: dinner time.

When we spoke with Clarke back in June, he explained why he decided to have a grown man (David Milchard) re-enact scenes with him instead of his young daughter:

“Kids have this natural vulnerability about them; they’re these innocent, pristine creatures, in a selfish, narcissistic way, which is essential to their development. David doesn’t have that. When you take away that innocence, and you’re left with the narcissistic, selfish qualities, it highlights the absurdity of these interactions.”

That basic principle of comedy is the foundation of Convos. Throughout the series, Clarke’s bargaining with his daughter becomes farcical when Milchard is involved. In this clip, he doesn’t want to eat his spaghetti; he wants to watch Fern Gully.