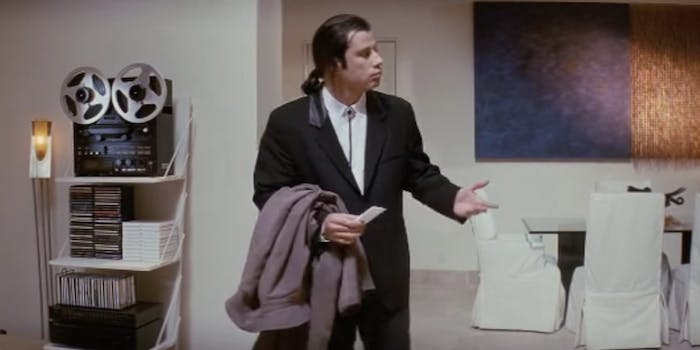 ‘Confused Travolta’ is the GIF that keeps on giving

John Travolta is a little mixed-up these days.

In a new inexplicable GIF meme, Confused Travolta, appearing as Pulp Fiction’s Vincent Vega, is a perpetual fish out of water, unsure of whether he should sink or swim. Even though he is at least a level OT-V Scientologist (although evidence indicates he is at a much more advanced level), Confused Travolta appears to be overcome by his reactive mind—the subconscious layer of being that controls his impulses—in the GIFs.

Confused Travolta first appeared on Imgur a month ago, a company rep told the Daily Dot via email, with a caption that read, “MRW I ask my daughter what she wants for Christmas and she says, ‘A doll.’” Travolta is stumped in the toy aisle of a megastore, flanked by hundreds of dolls.

MRW I ask my daughter what she wants for Christmas and she says, “A doll.”.

The GIF went viral, throwing Confused Travolta into countless familiar situations. Nobody, for example, told Travolta that class was canceled:

MRW no one tells me the class is canceled

Travolta forgot why he walked into the kitchen:

MRW I’m in the kitchen and don’t remember why…

MRW I’m playing hide and seek with my little nephew

Travolta couldn’t find a good seat at the movie theater:

Travolta couldn’t even land a proper high-five from Drake:

But the GIF meme shines even in far-fetched, cinematic situations.

TFW you’re the guy in the “Take On Me” video:

TFW Hank Scorpio impresses you with a cool party trick:

And now, Confused Travolta isn’t simply reserved for upper-echelon Scientologists living on Gold Base. Even the standard OT-III can make one of their own. So make Xenu proud!